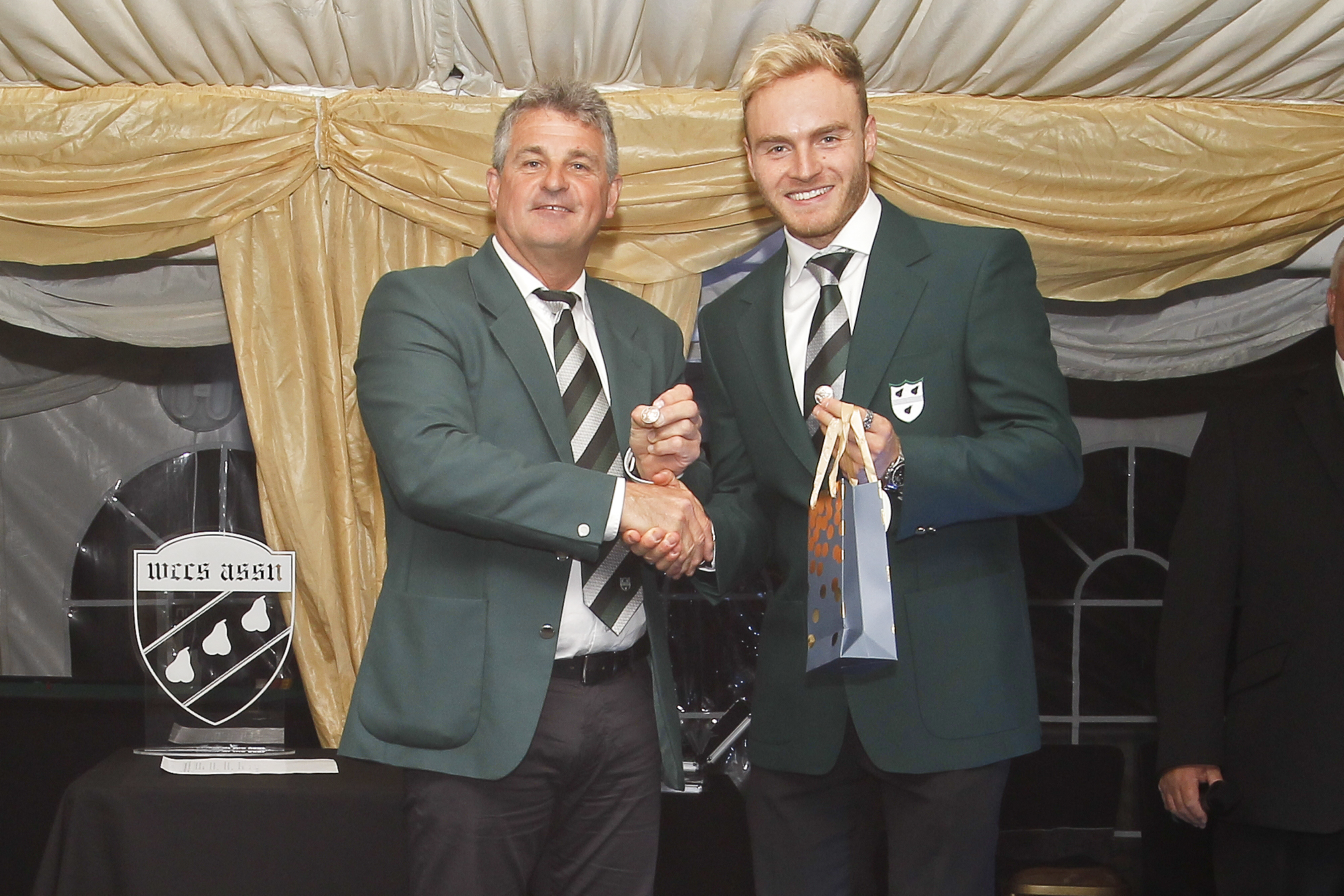 Here is a full list of all the award winners in what has been a memorable season which culminated in promotion to Division One of the Specsavers County Championship.

The Cricket Society’s ‘moment of the season’ went to Ross Whiteley for his six sixes in an over against Yorkshire in a NatWest T20 Blast match at Headingley.

Whiteley achieved the feat at the expense of Yorkshire spinner Karl Carver.

He has become the first Englishman to achieve this remarkable feat and only the fifth player in history.

The Fans’ Forum Fielder of the Year Award

Each match, members of the Fans’ Forum can nominate the player they consider to be the outstanding fielder.

Points are awarded from the nominations which ensure that ground fielding is recognised and also catches, stumpings, and run outs. The player with the most points over the season is declared the winner.

As in past years, the competition was close, with Ed Barnard, Ben Cox, Brett D’Oliveira, and Ross Whiteley leading the way.

Whilst we obviously do not include opposition players, we feel it would be remiss of us not to mention the performance of Bear Helmet in the T20 Blast match at Edgbaston and the invaluable contribution to a five run win!

With his overall excellence across all formats the winner of the 2017 Fans Forum Fielder of the Year is Ed Barnard.

“The difference between the two teams at the end of the game was………….five runs.

“Now we cannot give our award to the helmet, as he cannot make it this evening, or to the Warwickshire wicketkeeper, who is on an ECB juggler’s course.

“So it musty clearly go to the Worcestershire batsmen who very cleverly managed to miss the ball in the first place and gain five penalty runs.

Ed Barnard collected 50 per cent of the vote to win the Supporters’ Association Player Of The Year award for the first time.

The 21-year-old enjoyed an outstanding season with bat and ball in the Specsavers County Championship, scoring nearly 600 runs and taking close to 50 wickets.

Barnard has made big strides forward in all departments of his game this summer after spending the winter playing grade cricket in Australia with Scarborough.

He achieved career best bowling figures of 4-23 versus Gloucestershire at New Road and his career best score of 75 in the match against Durham at New Road which ended this week.

Daryl Mitchell was runner-up with 20 per cent of the votes.

Skipper Joe Leach has won this award for the best individual performance in a game with his contribution in the opening home Specsavers County Championship match of 2017 against Northamptonshire.

In a low scoring match, Leach picked up five wickets in both innings for the first time and finished with his career best figures of 10-122.

It was a victory that was to prove crucial in the overall picture of the season with Northamptonshire one of Worcestershire’s main rivals for promotion.

Mention is also given of Joe Clarke’s two superb hundreds in the victory over Kent at New Road – the first time the England Lions player achieved that feat.

The Damian D’Oliveira Academy Player Of The Year Award

Paceman Adam Finch has made massive strides forward during the past two years and in 2017 was a regular member of the Second Eleven.

He demonstrated his potential by taking 5-19 against a powerful Yorkshire side in a Championship match at RGS Worcester.

Finch’s performances also earned him a call-up into the England Under-19 side for the ODI Series versus India this summer.

He has been a role model for all Academy players to follow and retains his humility, hunger and inteliggence for the game and continually impresses with his skills on and off the pitch.

Daryl Mitchell has enjoyed an outstanding season with the bat and played a massive role in Worcestershire’s promotion push in the Specsavers County Championship.

He became the first player in Division Two this season to reach 1,000 runs and surpassed his previous best season in terms of centuries with seven in 2017.

Daryl also made telling contributions in white ball cricket – with the ball as well as the bat – and offered sterling support to his successor as captain, JoeLeach.

The Young Player of the year Award – Sponsored by GTECH

Josh Tongue had a debut season of first team cricket to remember afterputting his well documented back problems behind him and becoming a key member of the side at the age of 19.

The Academy product played in every County Championship match after returning his first five wicket haul on his debut in the competition against Glamorgan at the SWALEC Stadium.

Josh formed an impressive partnership with Joe Leach and Ed Barnard in taking the majority of the wickets in the promotion campaign.

He also made his debut in One-Day Cup and T20 Blast cricket and signed a new four year contract.

The T20 Player of the Year Award – Sponsored by EBC Group

Joe Clarke was already established as a major force in County Championship cricket for Worcestershire after scoring 1,200 runs in 2016.

But this summer he also made a big impact in the short format of the game after being promoted to open the batting.

Clarke demonstrated he also had a power side to his game and smashed 19 sixes in the T20 Blast – one more than Ross Whiteley.

The hightlight was a memorable 124 not out off just 53 balls against Durham at New Road.

Ben Cox has enjoyed another excellent season behind the stumps and again produced several key innings including a career best 124 against Gloucestershire at Cheltenham.

It is eight years this month since Cox made his debut as a 17-year-old while still at Bromsgrove School against Somerset at Taunton – the match in which Daryl Mitchell scored a career best 298.

He has become the man to answer a crisis with his determined batting but also has the power game to influence a match when circumstances dictate.

Cox’s wicket-keeping has also developed to such an extent that he is now regarded as one of the best glovesmen in the country.

But Cox is also highly regarded for his off the field contributions and is now a highly respected senior figure – even though he is still aged 26 – and is the County’s Professional Cricketers’ Association representative.