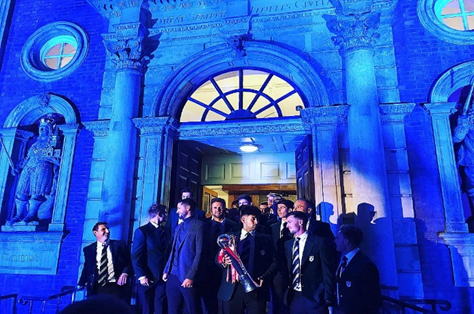 Worcestershire CCC were honoured for their Vitality Blast triumph with a civic reception at the Guildhall in the city of Worcester this evening.

A sizeable crowd gathered outside the historic building and joined in with guests in singing along to the Neil Diamond classic ‘Sweet Caroline’ – a piece of music now strongly identified with finals day at Edgbaston.

Then the players led by Brett D’Oliveira, who has captained the Rapids in several Blast matches this season, displayed the trophy and signed autographs before attending the civic reception.

Virtually the entire squad was present plus coaches Kevin Sharp, Alan Richardson, Alex Gidman and Elliott Wilson plus CEO Matt Rawnsley and new chairman Fanos Hira and many of the backroom staff.

The Mayor of Worcester, Councillor Jabba Riaz, who greeted the victorious team, praised a triumph based on a club that “grows its own” in terms of producing players.

He said: “The success is built on the foundations of the junior pathway system and academy programme.

“The late Damian D’Oliveira and Steve Rhodes gave so many opportunities to young talent and now it is carried on by Kevin Sharp and Elliot Wilson.

“There has been a lot of hard work to get to this stage and the victory and celebrations take years of effort and the culmination was the brilliant effort that night at Edgbaston.”

CEO Matt Rawnsley said: “A thank you to Mr Mayor and the city for recognising Worcestershire County Cricket Club in this way.

“It’s been an absolute pleasure this year to lead this club this year. Regardless of someone’s role and responsibility at the club, it’s been fantastic to see how as a club we have brought ourselves together and celebrated success together.

“We have overcome challenges together and I’m sure we have laid foundations for the future where we will be much stronger as we move forward.

“I’d like to thank all those people who play the supporting roles who don’t get the plaudits – the coaches, the backroom staff, the catering staff, the ground staff.

“For us this is a great foundation to move on from. We want to be more involved in the local, business, sporting and social community and the responsibilities that come with that.”