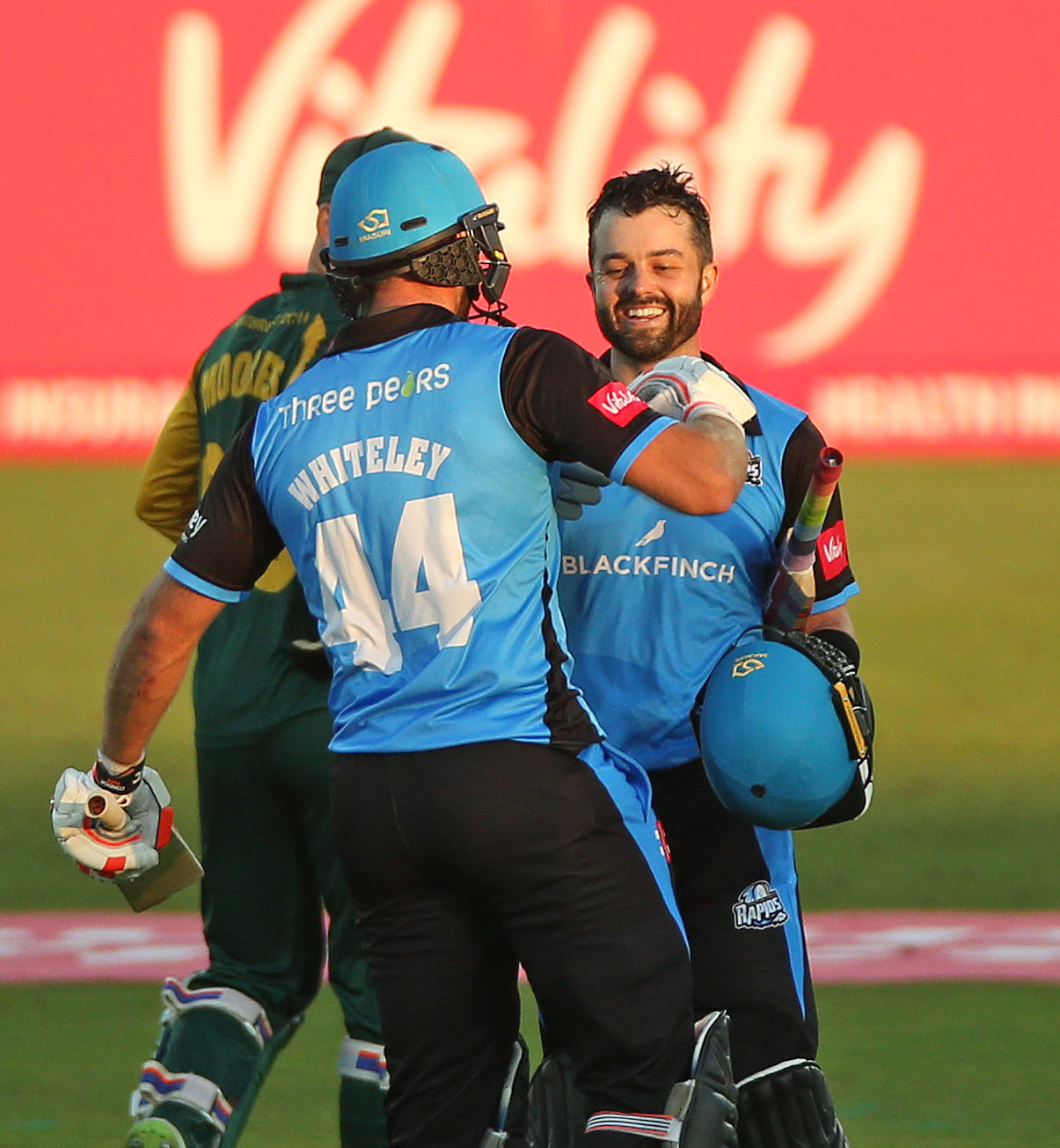 A superb unbeaten century from Callum Ferguson strengthened Worcestershire Rapids position at the top of the North Group of the Vitality Blast.

Ferguson scored 102 not out, making his runs from 56 balls, with 10 fours and two sixes, as the Rapids made it two wins in 24 hours by defeating Notts Outlaws by 72 runs at Trent Bridge this evening.

Victory stretched the Rapids advantage at the top of the table to three points with four games to play as they followed up last night’s nail-biting success over Durham Jets with a resounding victory.

Ferguson’s first T20 hundred helped his side to 206-2 with superb support coming from skipper Moeen Ali (65).

Ali opted to bat first upon winning the toss and helped Ferguson add 135 for the second wicket, to take the match away from the defending champions.

Notts, although bolstered by the return from injury of Alex Hales, lost early wickets and were always fighting against a sharply-rising run-rate and were dismissed for only 134 in 17.2 overs.

Wayne Parnell took 3-20 and Pat Brown, the leading wicket-taker in the 2018 competition, finished with 3-21.

Earlier, the Rapids lost Joe Clarke in the second over, with Harry Gurney taking a sharp caught and bowled offering, the dismissal that brought Ferguson to the crease.

The 33-year old, who scored two centuries for the Rapids in the Royal London One-Day Cup earlier in the campaign, rarely played a false stroke as he raced to his 50 from 31 deliveries.

Ali was going even quicker at the other end, racing to his 50 from only 29 deliveries faced, with three of the balls being clubbed for huge sixes.

The home side used seven bowlers, in an attempt to stem the flow of boundaries, but were only given a lift when Ali sliced Ish Sodhi high to point in the 15th over.

Ross Whiteley applied further punishment, bludgeoning his way to 32 not out, from only 18 balls.

Hales, out through a side injury since 8th July, hit both od his first two deliveries for four, as Notts began their pursuit of 207.

He only made 11, however, before hoisting Parnell to mid off. Then Riki Wessels was caught superbly by a one-handed grab by Parnell from Daryl Mitchell’s bowling.

Brown struck as soon as he entered the attack, having Tom Moores caught in the deep.

It became a bit of procession of wickets after that, although Steven Mullaney registered his first half century of this year’s competition.

He reached the landmark from only 26 balls but then failed to beat a throw from the deep by Ed Barnard and was run out for 58.

Ali completed a fine all-round match by removing Samit Patel and Dan Christian cheaply, to give him figures of two for 25.

He then caught successive blows off Jake Libby and Billy Root to give Brown his 19th and 20th wickets of the campaign.

Parnell closed out the contest by bowling Luke Fletcher and then had Gurney caught behind.