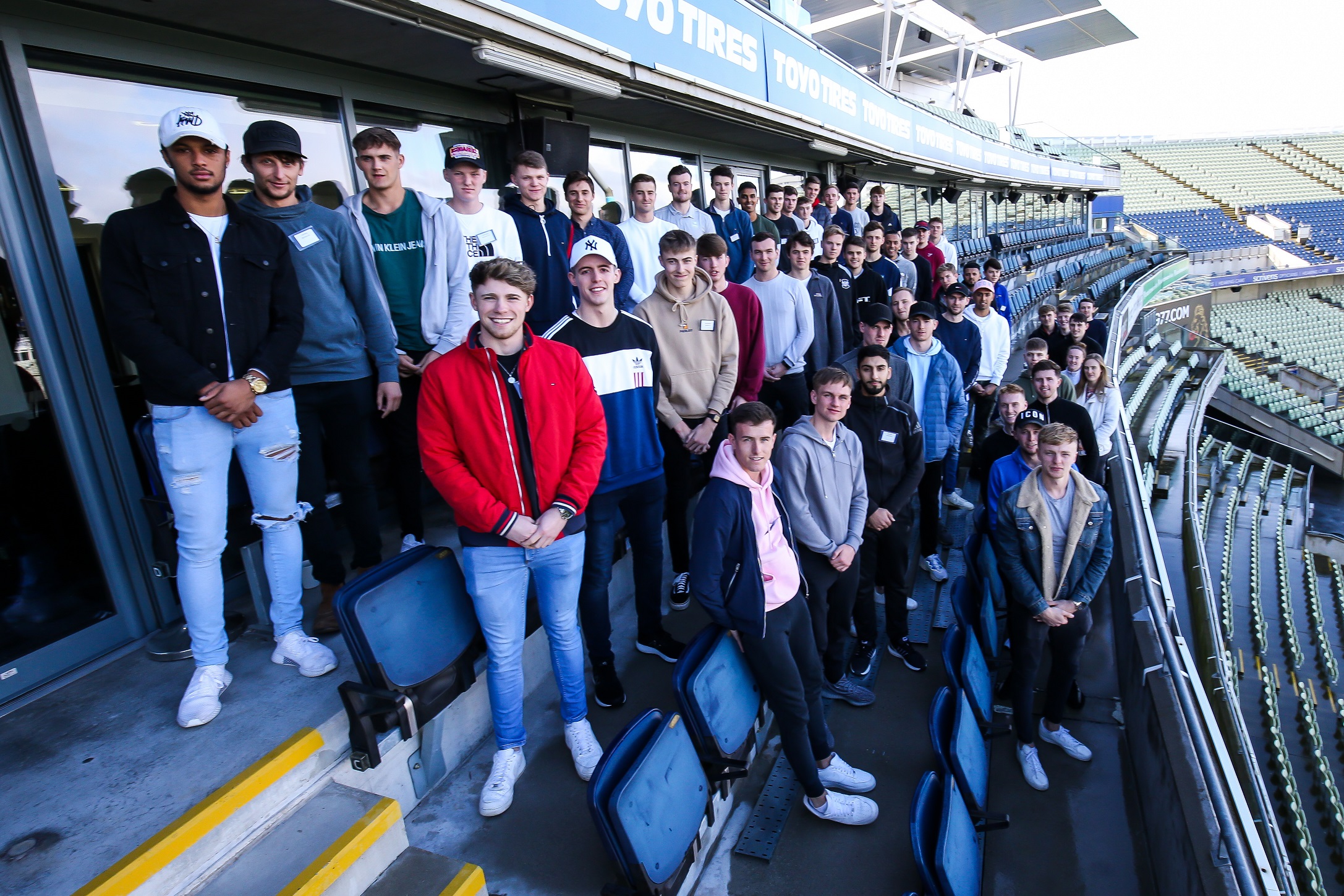 Worcestershire CCC duo Jack Haynes and Mitchell Stanley were inducted into the professional game at the PCA’s 10th annual rookie camp at Edgbaston.

Batsman Haynes and paceman Stanley were amongst a record 52 of England and Wales’ finest young cricketers who attended the camp on a day that highlighted the benefits of being a young professional.

It surpassed the previous record total of 37 – set last year – and the PCA has now helped over 300 players through their entry into professional cricket through the initiative, with 17 going on to represent England at international level.

The event, which was supported by the Professional Players’ Federation (PPF) as well as the Tom Maynard Trust for an eighth year in succession, brings together players who have recently signed their first contracts from across the 18 first-class counties and the women’s game.

The group, which included two players from the England Women’s Academy, attended workshops aimed at helping them to get to grips with the reality of life as a professional cricketer, including what the County Partnership Agreement, agreed last June, will mean to them.

Benefits of the agreement, which was negotiated between the PCA, ECB and all 18 first-class counties over an 18-month period, include an increased salary collar for young players, a binding minimum wage for all full-time professionals, the introduction of staged contracts for 18-21 year olds and increased accountability to the PCA from all counties regarding youth contracts in particular.

The new guidelines mean 2020 will be a game-changing year for youngsters in England and Wales, and there has never been a more rewarding time to get into professional cricket.

As in previous years, players attended a number of informative workshops with guest speakers including England stars Rory Burns and Saqib Mahmood, as well as Warwickshire sporting director Paul Farbrace.

Haynes, part of England’s Under-19s squad for this winter’s ICC World Cup, said: “It’s important for young players to do this because you have to be self-aware and be careful not to get too caught up in the cricket bubble.

“A lot of us know each other and have played against one another so it’s great to get together and learn all this stuff in a group setting.”

Rookie Camp forms part of the PCA’s Personal Development and Welfare Programme, which aims to improve players’ performance on the pitch by minimising distractions off it, as well as helping them to better prepare for life after cricket.

England opening batsman, and attendee of the inaugural Rookie Camp in 2011, Rory Burns, said: “Rookie Camp is a really positive event and it takes me back to when I attended the first ever one back in 2011.

“It’s been great to give the rookies some insight on my career so far and how I’ve got to where I am today.

“It’s massively important for players to understand what the PCA has to offer, particularly for the younger lads and for the older ones as well.”

Leus du Plooy, who last year signed his first contract with Derbyshire having moved to the UK from South Africa, said: “We’re just finding out what the PCA is all about and we’ve had some great insight into how the Association can help you.

“Every player has his or her own vulnerabilities so it’s great to know that there’s help out there for you if you need it.

“Good structures are put in place over here for people who need help or want to take their career further after cricket. Life after cricket is a reality that you need to face at some point in your career so it’s been really interesting to hear what the speakers have had to say.

Rookie contracted England Women batter, Emma Lamb, said: “Female cricketers need to learn this information because a lot of it is new to us with the way that the game is growing.

“It’s crucial to get on top of it all early so that we don’t make mistakes further down the line.

“Hearing from Saqib in particular was great because we were on the Lancashire academy together and he’s come a very long way since then, so it was really interesting to hear what he had to say.”

The PCA’s Director of Development and Welfare, Ian Thomas, said: “It’s been absolutely fantastic to see a record number of young cricketers here at our 10th Rookie Camp, and once again we are greatly appreciative of the support from the Professional Players Federation and the Tom Maynard Trust, who we have partnered with for eight years now.

“More important than the figures, though, is the information that this group of players has picked up from the likes of Rory Burns, Saqib Mahmood and Paul Farbrace today, as well as the key learnings which they will take home with them.

“There has never been a better time to be a young cricketer in England and Wales than right now, and I hope we have made that clear to the 52 players present, whilst also educating them on the potential pitfalls involved with a career in professional sport.”