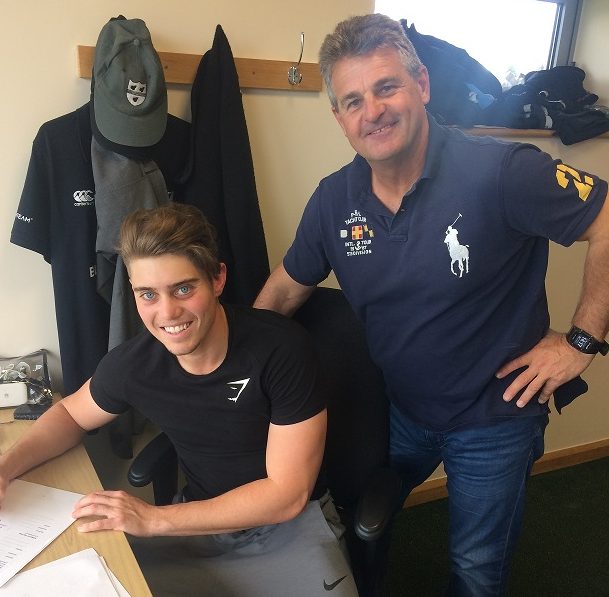 Worcestershire CCC all-rounder Alex Hepburn has signed a new one year contract after a summer of progress with bat and ball in 2017 at New Road.

Director Of Cricket Steve Rhodes is hoping next season will prove to be “a real breakthrough year” for Hepburn.

The Western Australian born player finished as leading run-scorer and top wicket-taker for the Seconds in three and four-day cricket.

Hepburn also broke into the Rapids side for the final five matches in the NatWest T20 Blast and returned figures of 5-24 in the home meeting with Notts Outlaws .

It was Worcestershire’s best ever bowling analysis in the short format of the game.

Hepburn made his senior breakthrough in 2015 with two appearances in the Royal London One-Day Cup against Leicestershire and Derbyshire which yielded six wickets – a year in which he made four centuries for the Seconds.

In 2016 he was Worcestershire’s leading run-scorer in the Second Eleven Championship and this summer has put together consistent performances with bat and ball.

Rhodes said: “If you ask the question ‘is Alex progressing’ then the answer would be ‘yes’ because he’s put on the table some good performances in the second team this year.

“Added to that he came into the first team and got a five wicket haul in the T20. He thoroughly deserves the opportunity to carry on his career.

“We are optimistic that next year will be real breakthrough year for the lad.”

Hepburn has played grade cricket in Perth on a regular basis for Willetton Dragons and Rhodes will leave it to the 21-year-old to decide whether he returns Down Under this winter.

He said: “Alex is here at the moment having a bit of a breather and a break but he has got options to go back or stay here and he’s not sure totally what he wants to do at the moment.

“If he goes back, he plays some good cricket, because Willetton play in a good standard. I’m leaving that decision up to him.”

Hepburn said: “It is nice to get rewarded for a good season in signing a new contract.

“For me next year becomes a big summer in terms of impressing again in the Seconds and getting more game time in the first team.

“This year it was really nice to get the opportunity in the T20 games and to come into the side and do as well as I did was pleasing.

“My goals next year are to play in all three formats and hopefully prove to myself as well as Bumpy (Steve Rhodes) that I should be in that side.

“Last winter I worked a lot on game plans and the more mental side of my game to be able to consistently score runs.

“That is what Bumpy has always said to me, to get into the first team you have to be consistently knocking on the door, which is what I did this year.

“Then with the ball, I had a more consistent role in the Seconds which helped me grow as a bowler and when I did get an opportunity in the Firsts, I had a bit more experience and more overs behind me to be able to execute things.”