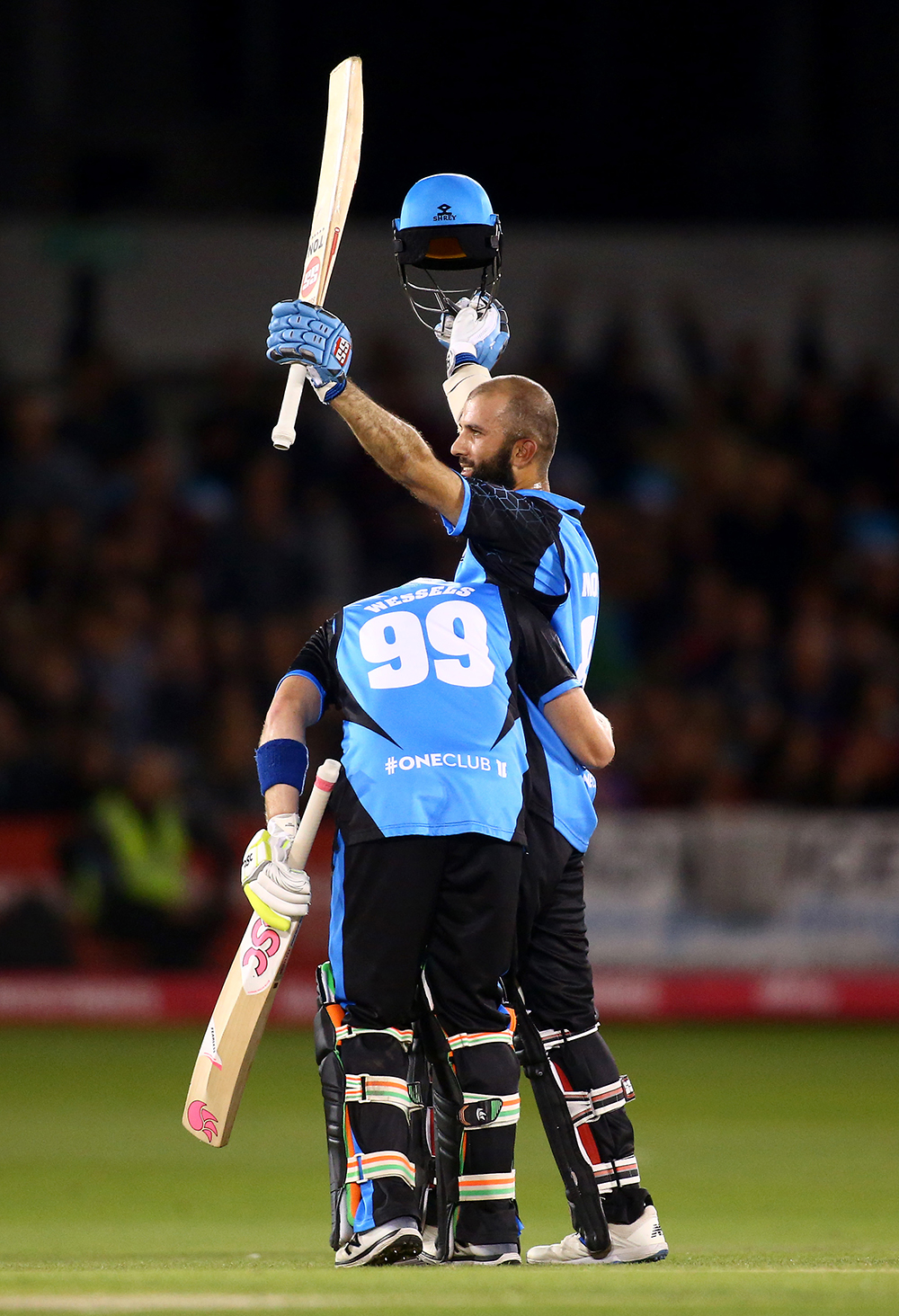 Holders Worcestershire Rapids are heading back to Vitality Blast finals day at Edgbaston on September 21.

A brilliant century from skipper Moeen Ali led them to an eight wicket win over Sussex Sharks at the 1st Central County Ground, Hove in a repeat of the 2018 final.

He finished unbeaten on 121 from 60 balls with ELEVEN sixes and eight fours in an astonishing display of power-hitting.

The Sharks got off to a flying start through openers Luke Wright and Phil Salt but superb spells from skipper Moeen and Ed Barnard – after an initial two wicket breakthrough by Daryl Mitchell – helped pegged them back to 184-6.

No-one had chased down 180 or more at Hove to win a T20 match for NINE years.

But Moeen – with superb support again from Riki Wessels – enabled the Rapids to charge past their target with 14 balls to spare.

The second wicket partnership of 177 with Wessels was a Worcestershire record for T20 cricket, beating the 149 by Graeme Hick and Ben Smith against Glamorgan at Blackfinch New Road in 2005.

Moeen raced to his 100 off 50 balls with nine sixes and seven fours with an awesome display of hitting as Sussex were left to rue dropping the 32-year-old when on just five.

Wessels (47) showed all his experience in the supporting role in being largely content to feed his partner the strike in a manner similar to the recent game against Birmingham Bears at Edgbaston.

His contribution in the win should also not be under-estimated.

The Rapids were without opening batsman Hamish Rutherford who had been called into the New Zealand squad for today’s T20I against Sri Lanka in Kandy.

All-rounder Wayne Parnell was also ruled out with the illness which had side-lined for the final North Group game at Northampton.

Paceman Charlie Morris came into the side for Rutherford in the only change for the Rapids – his first T20 appearance for three years since the game at Derby in 2016.

Moeen opted to bowl first after winning the toss and sent down the first over in front of a full house in the third of the quarter-finals, conceding just three runs.

Pat Brown came close to picking up two wickets in his first over – the fourth of the innings.

Luke Wright edged his first delivery inches short of keeper Ben Cox and then Phil Salt miscued the ball into the air and Morris running back from mid-on could not quite hang onto the chance.

Moeen had eight different bowling options at his disposal and mixed and matched his attack as the Sharks ended the powerplay on 55-0.

Salt completed his half century off 31 balls with three sixes and four fours.

But, in the same over from Daryl Mitchell, the first breakthrough came as Wright (28) holed out to Barnard at deep mid-wicket at 84-1 in the ninth.

Salt on 59 survived a confident lbw shout by Brown.

But in Mitchell’s next over the opener, having made 72 off 40 balls, was well held by Riki Wessels in a running catch at long on.

Barnard and Moeen then bowled a superb four over spell in which they picked up three wickets for a combined tally of just 21 runs between the 12th and 15th overs.

Alex Carey (8) was then deceived by a change of pace by Barnard and top edged a catch to Cox.

In the same over a superb yorker from Barnard accounted for David Wiese (0) who was bowled first ball with the total 120-4.

The England all-rounder ended with fine figures of 2-22 from four overs.

Morris came back into the attack and, after two slower deliveries, bowled a fine bouncer to Chris Jordan (2) who went for a pull and feathered through to Cox.

Barnard returned to complete an excellent spell of 2-21 from his four overs before Laurie Evans – 43 not out off 31 balls – lifted Sussex to 184-6.

Joe Leach (1) was promoted to open alongside Wessels and the Club Captain bowled by a fine delivery from Reece Topley in the opening over.

Moeen came to the wicket and flicked Topley through mid-wicket for four to get off the mark.

He had a let-off on five when he tried to upper cut Ollie Robinson and keeper Carey spilled the chance.

Moeen responded with a pick-up and a cover drive for boundaries in Robinson’s next over and huge sixes over mid-wicket and long off in the fifth over bowled by Topley.

The Rapids reached 50-1 in their six over powerplay,

Moeen went onto to smash spinner Will Beer for an 89 metre six over mid wicket on his way to a 30 ball half century which contained three maximums and five fours out of 71-1 after eight overs.

Two deliveries from Wiese then disappeared out of the ground – both also over mid-wicket – in an over costing 18 runs.

The Rapids reached 94-1 at the half-way stage.

Wessels, as in the win over Birmingham Bears at Edgbaston, again provided a fine foil to Moeen, being content to take the singles and give him as much strike as possible.

But in the 11th over from Jordan he opened up, rocking back to hit him through the covers for four and then squeezing a yorker down to the third man boundary.

Moeen went big again in clouting spinner Danny Briggs over long on for yet another six in an over which yielded 13 runs.

Wiese then parried a shot from Moeen backward of square off spinner Will Beer over the ropes.

Moeen went to a brilliant century with successive sixes – the eighth and ninth of his innings – backward of square off Beer out of 155-1.

Wessels (47 off 46 balls) was finally dismissed with six runs needed – caught in the deep – but Moeen ended the game in style with another massive six.