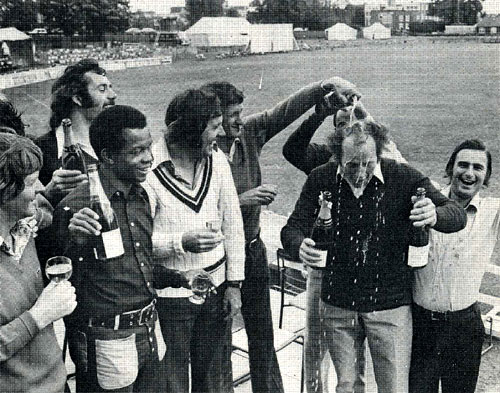 The climax to the 1974 County Championship was amongst the most dramatic in the competition’s history – with Worcestershire CCC defying the odds to be crowned as champions.

The County edged over the finishing line by just two points from Hampshire after a never say die approach to a rain-lashed finale to the campaign.

Skipper Norman Gifford played a pivotal role as a third Championship crown title in 11 years was sealed by Worcestershire..

Hampshire were massive favourites to secure back to back titles after an innings win over Worcestershire  in early August at Portsmouth.

It left them 31 points clear with five games remaining – but Worcestershire CCC refused to buckle and ultimately triumphed.

There were only two points between the teams entering the final round of games with Worcestershire clocking up a trio of wins after the setback at Portsmouth.

The then leaders Hampshire were set to face Yorkshire at Bournemouth and Worcestershire to take on Essex at Chelmsford but gales lashed the southern part of the country.

Day one at Bournemouth was a wash-out but Worcestershire were able to take to the middle at Chelmsford as Gifford’s spell of 14-6-16-7 on a drying pitch routed Essex for 84.

It was a crucial period of play as the four bonus bowling points secured edged Gifford’s men to the top of the table.

The teams broke off from that fixture to play John Player League 40-over Sunday matches – the normal practice in the middle of a Championship game in those days.

Both counties suffered a wash-out on day two on the Monday and it was a similarly gloomy picture with the weather 24 hours later.

But a drying wind meant Hampshire were finally scheduled to start playing at 3pm looking for the wickets needed to snatch the title from Worcestershire‘s grasp.

Just as the players were about to take to the field, the rain returned, the game was abandoned and Worcestershire players, coaches and officials were able to celebrate on the Chelmsford balcony with Gifford doused in champagne by his team-mates.

Gifford was chosen as one of Wisden’s Cricketers Of The Year and here he recalls the climax to that memorable title triumph and the star performers for Worcestershire CCC in an interview with the club’s official website and social media platforms.

He said: “We stood in the hotel opposite the ground at Chelmsford and it was pouring down and we thought there was ‘no chance’ but we got to the ground the next day and miraculously we got some play in.

“It was a drying wicket. Let’s say it was useful to bowl on! But they were a flipping good side with the likes of Goochy (Graham Gooch), Keith Fletcher, Ken McEwan, John Lever etc.

“We had got in front of Hampshire thanks to the bonus points and, with the weather as it was, we felt we had secured a good position.

“We kept in touch with what was going on at Bournemouth and it looked on the last day as if they were finally going to start but play eventually got called off – and that’s when the celebrations started!

“But the lads played very well, got stuck in, kept on believing, never gave up and they deserved it. We went on a good run and the win at Newark, when we sneaked over the line, was crucial in setting up the finish to the season.”

It was a proud day for Gifford to win a third Championship crown but he took satisfaction from the joy it brought to the other players.

“I was so pleased for all the other boys that they had managed to play in a Championship winning side.

“Don Kenyon was a big influence on me and my career and to follow in his footsteps as captain and win a Championship was very special.

“To win a Championship, in the days of one division with all 16-17 counties involved, was also a special feeling.

“There were some good sides around then – Hampshire, who had won the title the year before, Essex, Yorkshire, but we had some great players who pulled it out for us.”

Vanburn Holder (94 wickets) and Brian Brain (75 wickets ) did much of the damage with the new ball and the pair were a crucial factor in the title success.

Gifford said: “Vanny was a special performer and a special man. For me as captain, he would do anything for you.

“He would never look at you and say ‘you don’t want me to bowl again do you’ He tried his socks off every day from first ball to last ball.

“Brian was more of a seam bowler than Vanburn but he produced good lengths, good lines, moved the ball around. He was a good performer.

“John Inchmore also played an important role. He could moan a bit but, when he had the ball in his hand, he was aggressive. It suited us. He suited our type of play.”

But leading the way with the bat was opener Glenn Turner who in another prolific season scored 1,332 runs at an average of 60.54.

Gifford said: “If you look from the 1960s and right through the decades, we’ve had some special players at Worcestershire.

“We had the Graveneys, D’Oliveiras, Hicks, Bothams and we often tend to forget about Glenn Turner.

“He had so much talent, he was a special player. He would get you runs on all types of wickets.”

Gifford has only one regret from that mid 1970s era in the County losing the services of Imran Khan to Sussex after the 1976 season when he was developing into the world star he would eventually become with Pakistan.

He said: “I think if we had kept that side together and Imran would have come into it, knowing what he was capable of, I think we would have won the Championship once or twice more.”