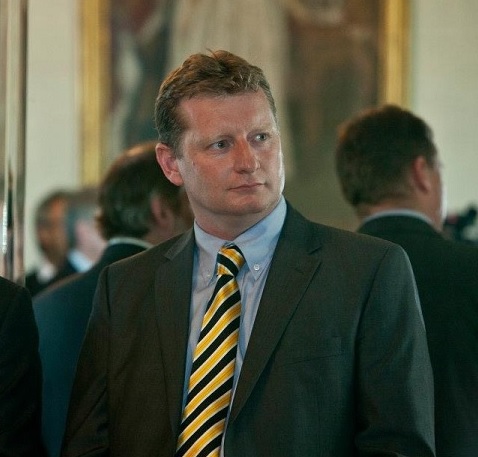 New Worcestershire CEO Matt Rawnsley has revealed his desire to communicate on a regular basis with Club Members via meetings in the Hick Pavilion on the opening day of home Specsavers County Championship matches this summer.

Rawnsley addressed members for the first time at yesterday evening’s club AGM in the Hick Pavilion.

He admits he felt the same feeling of pride when taking up the post at the start of this month as when starting his first season as a professional cricketer with the County 23 years ago.

Rawnsley wants to enter a new era of positivity and transparency in communicating with the membership.
He also said his relationship with new Head Coach Kevin Sharp is also “very strong.”

Rawnsley told members: “My first time here was an 18-year-old and that was the start of wonderful period of my life as a professional cricketer for Worcestershire.

“It is an absolute privilege to stand in front of you as the new CEO and is absolutely my desire to continue some of the great work that has been done over the last few years.

“I understand the responsibility that comes with this role and I wholeheartedly want to do everyone proud.

“I see myself as a Worcester person. I moved here as an 18-year-old from Birmingham and have lived within a five mile radius of this ground for the last 25 years.

“I really understand the role Worcestershire CCC plays within the city and the county.

“It is part of my responsibility also to look at the way the structure of the game within the county.”!

Rawnsley added: “There are relationships that need to be built and those that need to be repaired and it is very important for me moving forward that we enter a new era of positivity, transparency, communication between the club and its membership.

“I’d like to communicate far more with the membership, be very active and visible around the ground, talking to you, understanding your questions and concerns.

“I don’t promise you I’ll have all the answers and give you all that you want – but I do promise that I will listen.

“I’ve been a player and a supporter here and I value the responsibility I’ve been given.

“One thing I’d like to do is maybe on the first day of every home Championship fixture we meet in the Hick Pavilion and I’ll be open for questioning and have a conversation with those people who want to talk to me.”

He said: “Jon Graham’s professionalism over the last three months has helped me understand the business and made sure on March 1 I had visibility to some of the challenges we have ahead.

“To also know Jon is there to help and support me through this transitional period is very welcome. There is the chance now to start a new era.

“The first role I had to do on March 1 at 8.30am was to sign Dillon Pennington on a new contract and that was an amazing thing to be able to do – as someone had done for me back in 1994.”

Rawnsley added: “We’ve made some changes with the restructuring of the coaching group. Kevin Sharp and I had never met before and the relationship we have is very strong.

“I think that’s incredibly important in this role, having a strong relationship not only with the coach but also the people on the commercial side.

“We’ve also made some fantastic additions to that coaching team in Alan Richardson and Alex Gidman.

“I urge you all to have as much inter-action as you can with that coaching group because we have some very special people who are responsible for the performance of the team.”