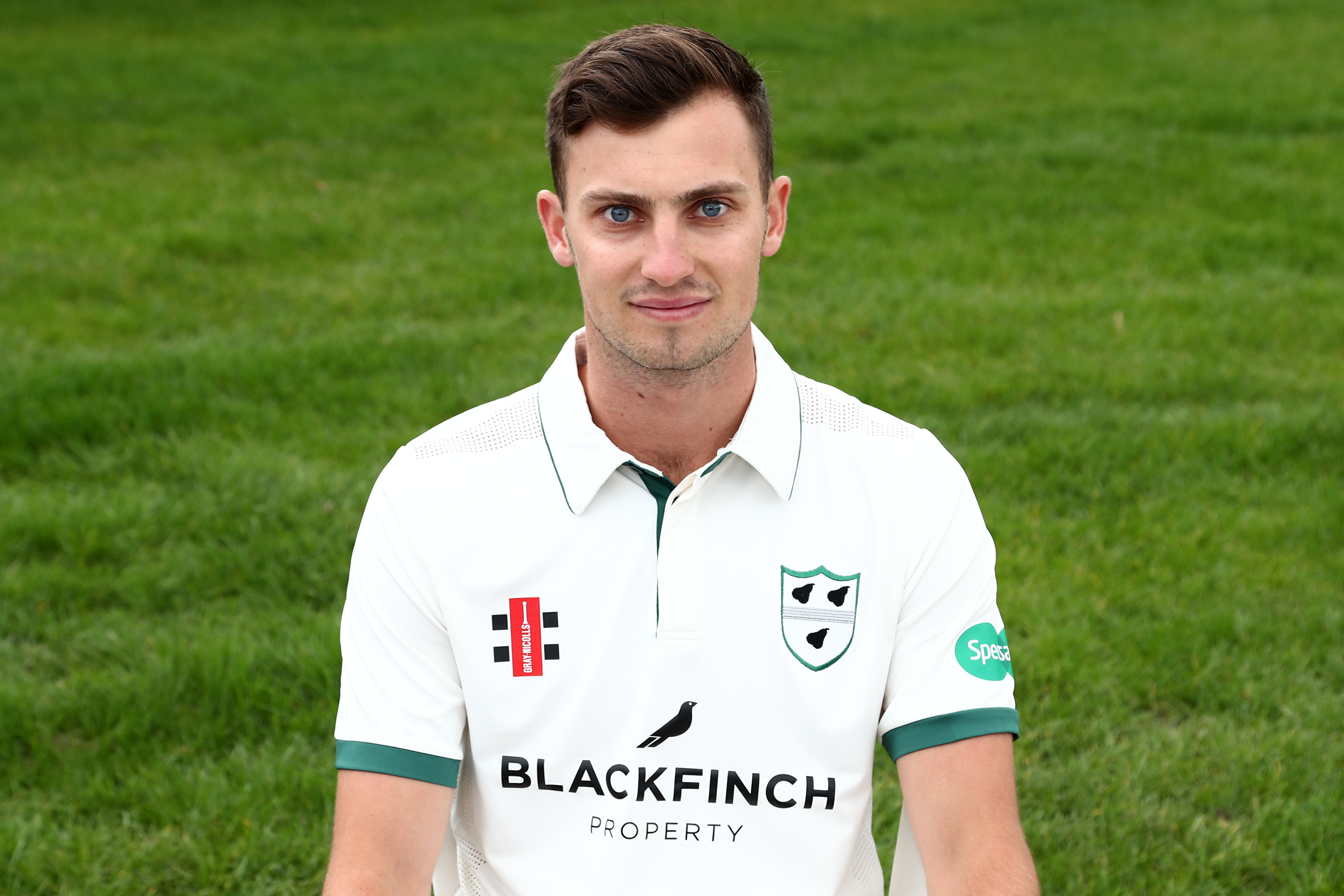 Worcestershire CCC all-rounder Ed Barnard says he is looking to “kick on with my levels of performance and consistency” with both bat and ball.

Barnard has been a key member of the County’s attack with returns of 49, 47 and 44 wickets in the County Championship during the past three years.

The 24-year-old has a career return of 187 wickets from 60 first class matches at an average of 27.19 with five five-wicket hauls.

Barnard has also weighed in with key lower order runs and totalled 2,028 at an average of 26.28 with 12 half centuries in 90 knocks.

On top of this he has been an integral part of the Rapids success in white ball cricket and is a superb fielder.

But the Shrewsbury born player is determined to become what he classes as a “genuine all-rounder” and seal a spot in the top six via weight of ‘big runs’ and in the process boost his hopes of further international recognition.

Here the England Under-19s and England Lions player looks back, at the present, and his ambitions for the future, in a Question And Answer Session with the Worcestershire CCC website.
—
Question: You’ve shown yourself to be a consistent performer with 47, 49 and 44 Championship wickets during the past three seasons. You’ve got to be pleased with the consistency?

Ed Barnard: “I think my bowling is in a place where I’m pretty happy with it at the moment.

“I’m probably slightly disappointed because I want to get to that 50 wicket mark especially having gone so close two years ago.

“It was a challenge to myself to try and get there last year. Obviously I didn’t quite do it but I was still pretty happy with the way I performed.

“But I’m really looking to kick on these next couple of years and see if I can get to that 50 wickets and get more responsibility with the ball and with the bat and kick my levels of performance and consistency on again.”
—
Question: You tend to get your wickets in clusters – 11 versus Somerset, nine against Lancashire stick out in the recent memory and a lot in one spell of matches towards the end of last season?

Ed Barnard: “Over the last three seasons really that’s been the case. Three seasons ago I took a lot towards the end of the season.

“It just seems to be one of those things, if I get into a bit of a rhythm. It’s one of those where if you work hard, it (the success) will come.

“I had a bit of lean period at the start of last season, took only five or six wickets in the first few games but I know if I keep working hard and trying to do the right things, I will catch up.

“It’s not always about taking wickets yourself. It’s sometimes about building pressure and the lads getting the job done at the other end.”
—
Question: It must be a challenge to stay in rhythm as a bowler for a full six month season?

Ed Barnard: “It is a big effort. I’ve played virtually every game for the last two or three years which I’m really pleased with and proud of.

“It is about times like now in the winter, getting my fitness levels in and making sure I’m getting all the hard work done, and keeping it up throughout the summer with the strength team.

“Dewsy (Ross Dewar) and Benny (Ben Davies) are very good with me. I’ve managed to stay fit, touchwood, and haven’t had any major injuries for a while.

“Yes, it is a big effort and they are long seasons – but I love it. It’s a job I really love doing, and I don’t really see it as a job.

“It can be tough at times but sometimes you have to think about things other people are doing (for a living) and it just gets you through.”
—
Question: Yourself and Joe Leach bowled a lot of overs again last summer which tends often to be the case?

Ed Barnard: “I think that comes from the type of bowlers we are. The more, what you would call, explosive bowlers are better when used in short terms so sometimes myself and Leachy have to fill in those longer spells which we are more than happy to do.

“It’s our role in the side and I think we do it quite well.”
—
Question: What so you mean by wanting to be more consistent when you already are to an extent?

“I’m always pushing myself for more. I’m not saying I’m unhappy with what I’ve been doing but I want to keep that improvement going and keep on that rise if I can.

“Obviously I’d love to push on again and play some higher honours (international) stuff if I can but I don’t think about that. I just try and do as well as I can for Worcestershire and see where I’m at.”
—
Question: On the batting front last season, you found yourself at number four for a short spell?

Ed Barnard: “It was a bit of an interesting one last season. I batted in a few positions and I was probably disappointed that when I did move up the order I didn’t score the runs to keep myself in that top six.

“I ended up back at number eight – which I’m happy to bat – but, like I’ve said before, I do want to bat in that number five, six role if I can but I also know I have to earn my right to bat there by scoring big runs.

“I’ve consistently scored runs over the past couple of years but not ‘big’ runs which is something I’ve been disappointed with.

“It’s something I want to kick on with again. I want to put together big scores and turn myself into that genuine all-rounder.”
—
Question: You are still looking for that first hundred you’ve talked about in the past?

Ed Barnard: “It is there. The last couple of years it has preyed on the mind a little bit but all I can do is the hard work in the nets and, whenever I get a chance, hopefully kick on and score it.

“But as long as I’m scoring runs and we are winning games as a team, I’m not really fussed about personal milestones.”
—
Question: You’ve been back at Malvern College a lot earlier than previous winters and game management for bowlers was one area that was going to be on the agenda. Is that something the lads are conscious of?

Ed Barnard: “I think so. If you look at the last two years, there have been a number of performances where we’ve had one or two bad sessions – but they are not just bad sessions, they are catastrophic sessions where the game gets away from you.

“Especially last year, there were two or three games that were close games but one or two sessions let us down and we ended up on the wrong side of things whereas if we had turned a couple of those around, it could have been a very different season really.

“There were sessions in a couple of games where teams were going at five and six an over whereas if you can keep those sessions in check slightly more, recognising them….but that’s game management.

“Some of the lads are young and learning and hopefully going forward we will learn from it and put in some better performances.”
—
Question: The red ball game will dominate the early part of the season. How important is to start well and gain momentum?

Ed Barnard: “Our red ball cricket has been disappointing for the past couple of years. We make no bones about it.

“But if we can hit that first game really hard and get off to a good start – and a lot of training this winter has been red ball emphasis – you can get up a head of steam and hopefully be up there challenging come the end of the season.

“If you start well, it sets you up before you go into the white ball cricket. We are a very strong white ball side and we want to continue that.”

Question: The international goals are still in your mind?

Ed Barnard: “It is something I had a little taste of a couple of years ago (with the Lions) and I loved having that chance.

“I probably recognise my performances haven’t quite been at that level since and there are some very good young players around and certain aspects of my game that I need to improve on if I want to kick on.

“But I’m trying to do that, I’m trying to improve myself as a player, to give myself the best chance of putting myself in the frame for selection.”
—
Question: You produced a superb catch to dismiss Jake Libby at Trent Bridge in the T20. Now he is part of our squad.

Ed Barnard: “I think he is a great addition to our squad, a really exciting young player.

“He has been around for a while now and scored some good runs when he has had the chance at Notts.

“He also seems a lovely guy and I think he will fit right in.”