County Bowlers Stick To Their Guns On Opening Day At Kia Oval
Friday, May 4th, 2018 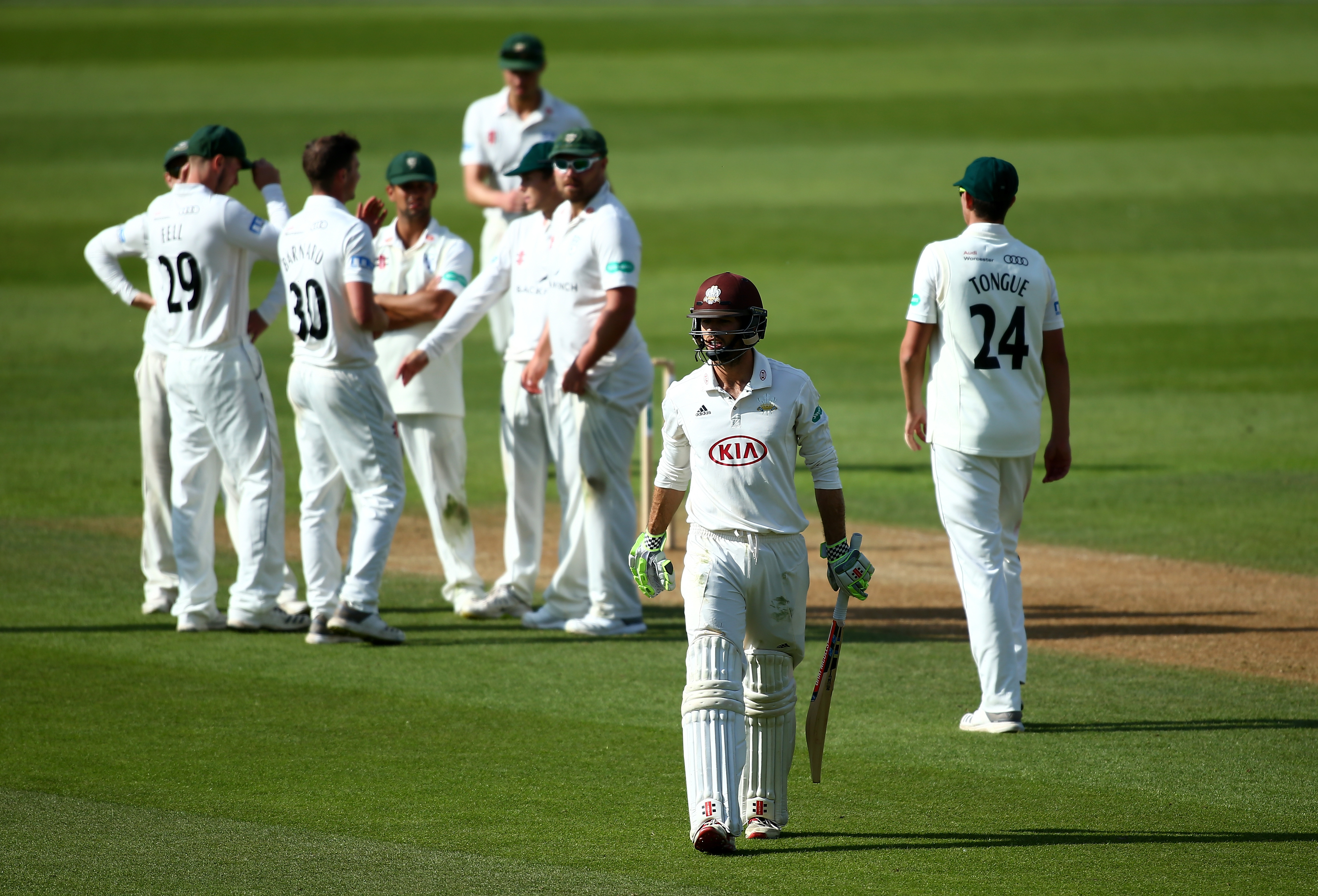 Ben Twohig made an encouraging Specsavers County Championship debut and skipper Joe Leach produced another impressive performance with the ball on day one of the Division One clash with Surrey at the Kia Oval.

Twenty-year-old spinner Twohig had been denied his first class debut in the washed out match with Leeds-Bradford MCCU at RGS Worcester last month.

But he got the nod from Head Coach Kevin Sharp and Leach this morning and showed his promise on a day where Surrey’s new captain Rory Burns anchored his side’s total of 278-4 from 96 overs with an unbeaten century.

Twohig was used in short spells and showed plenty of promise in sending down 13 overs for 33 runs.

Leach was the pick of the seamers and constantly asked questions of the batsmen as he finished the day with 2-64 from 23 overs when on another day he could easily have picked up four or five wickets.

Josh Tongue also bowled some good spells without any tangible reward but all the County’s bowlers stuck to their task after Surrey opted to bat.

Leach told BBC Hereford-Worcester: “We were slightly unlucky, I suppose, but we’ve dropped a couple of catches that would have got us six wickets down and then possibly you are looking at a slightly more even day.

“All our bowlers stuck to their task today and we fielded, for the most part, very well apart from those couple of chances. You could argue we were slightly unlucky at times.

“The pitch has got the reputation for being a very good pitch. It did quite a bit with the new ball and you could argue that first hour was when we were at our most unfortunate.

“We beat the bat a lot in the first hour, and it was a shame we didn’t get two or three wickets then. On another day, we might have done.

“But as the ball got old, and the sun was out, it felt and looked like a nice day for batting.

“Will the Burns dropped catch prove crucial? The proof will be in the pudding and we will see. The pitch goes back under the covers now and we hope it does a little bit again in the morning.

“The ball is still relatively new, 14 overs old, so hopefully it does a bit and we can take our chances and bowl them out.”

Surrey openers Mark Stoneman and Burns, were given a searching examination by Leach in a probing eight over opening spell.

He regular beat the outside edge but it needed another sharp piece of fielding from Ed Barnard to run out England batsman Stoneman for 28 with exactly 50 on the board.

Barnard had run out star South African batsman Hashim Amla with a direct hit in the opening match of the season at the Ageas Bowl.

This time he accounted for Stoneman who pushed a Josh Tongue delivery into the covers, set off for a quick single but was beaten by Barnard’s throw to the non-striker’s end.

Twohig came into the attack for the first time shortly before lunch for a three over spell and enjoyed a moral success when he found the edge of Scott Borthwick’s bat.

Surrey went into lunch on 87-1 from 31 overs but then Leach reintroduced himself into the attack after the interval and enjoyed a richly deserved double success.

In the first over Borthwick (10) was caught behind by keeper Ben Cox and then the same combination accounted for Ryal Patel (10) who was undone by a delivery which nipped away from him at 99-3 in the 38th over.

Burns went to his half century off 123 balls with six boundaries out of 101-3.

He was joined by Ben Foakes and the fourth wicket pair rebuilt the Surrey innings after the double pre-lunch breakthrough.

The 100 partnership came up in 193 balls and Burns went to his first century as Surrey club captain with a cover drive for four off Charlie Morris. It came off 222 deliveries with nine fours.

Barnard came back into the attack and immediately broke the partnership as Foakes (72) nicked a ball that shaped away to provide Cox with his third catch. The stand was worth 125 in 35 overs.

Burns had a life on 121 after edging Tongue with Cox just unable to cling onto the ball one-handed away to his left.