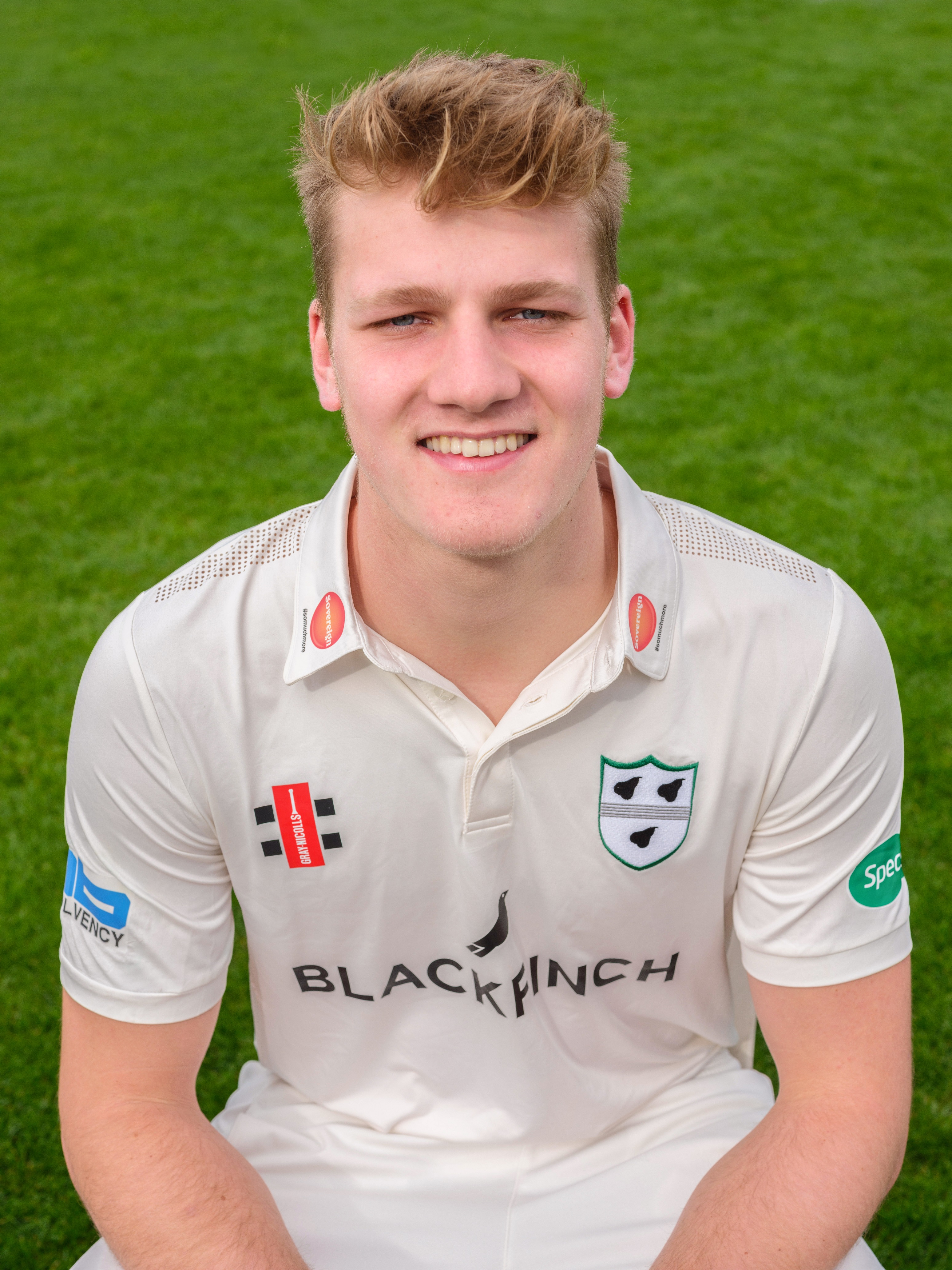 Paceman Dillon Pennington says he will be working on adding consistency to his game when he reports back for winter training with his Worcestershire team-mates in mid November.

Pennington gave evidence of his undoubted potential after injuries to Joe Leach and Josh Tongue provided an initial opportunity which flourished to such an extent that he ended up playing eight games in the Specsavers County Championship.

His performances against Yorkshire in the win at Scarborough, when he troubled star New Zealand batsman Kane Williamson, and during the home clash with champions Surrey would have whetted the appetite of Worcestershire supporters.

But the 19-year-old, who will undergo his first full winter programme at Blackfinch New Road and Malvern College, recognises he has to produce such quality on a more regular basis and will work on that aspect of his game during the next few months.

Here Pennington looks back at his breakthrough season and the challenges ahead in a Question And Answer session with the Worcestershire CCC website.
—
Question: You ended up playing eight County Championship matches, it must have been fantastic for you to get all that cricket in?

Dillon Pennington: “When the few injuries (to players) happened at the start of the season, I was a bit nervous and thinking that my chance would probably come as I was doing alright in the Seconds.

“But after the first game, realising how challenging it was and how good the players are we were playing against, I didn’t quite expect to be still playing at the end of the season in red ball cricket.

“It was unbelievable I got the chance and opportunity to play that amount of games for Worcestershire at the start of a long career hopefully.”
—
Question: You played the last six Championship games in six weeks after hardly having ever played four-day cricket in your career?

Dillon Pennington: “I had hardly played any three day cricket if I’m honest! I was talking with Elliot Wilson (Academy coach) near the end of the season and he was saying ‘you only made your Seconds debut last year.’

“I remember I bowled 13 overs in a day and I walked off like I had bowled about 50 and I couldn’t move the next day!

“It’s a bit of a shift to then being fit enough to be able to play those six Championship games on the bounce which is a credit to Ben (Davies) and Dewsy (Ross Dewar) and myself.

“I tried to stay in the gym all that summer (2017) and then challenged myself to keep at it all last winter and then moving onto into this summer so I’ve been able to play all season without any injuries.

“I’ve had a few niggles and in the past I might have had some time away from playing but I’ve learnt that you’ve got to get out there and keep bowling and keep trying your hardest and I’ve loved it.”
—
Question: You ended up with 22 Championship wickets and there were some eye-catching performances against Yorkshire and Surrey?

Dillon Pennington: “Scarborough was awesome, I’ve had highlights all through the summer and playing against Kane Williamson, who is an unbelievable batsman and being able to have a good contest with him, is something I’ve looked back on.

“But also the game against Surrey and hearing some nice words from Morne Morkel…..playing against those calibre of players has been really awesome.”
—
Question: Kane Williamson praised you in the same way as Morne Morkel did?

Dillon Pennington: “It was very nice of him to say the things he did. I wanted to have a chat with him at the end of the game because there is such an amount of stuff you can learn off these players but the opportunity did not arise.

“But it was brilliant to hear the things he said and, when things aren’t probably going right in what hopefully is a longish career, you can look back at things like that and hopefully they will help me along the way.”
—
Question: Is obtaining consistency something you will now be looking to achieve?
Dillon Pennington: “In some games my economy rate was quite high in Championship and it’s a long game and there are going to be ups and downs.

“There have been spells where I haven’t bowled as well and there are little periods where I didn’t play as well as I should have.

“Speaking to the coaches, they are very understandable that at a young age (19) that is going to happen.

“That is a massive thing I want to work on over the winter, just getting that consistency when I am playing and just bowling to my strengths throughout the winter.

“Hopefully that leads into the pre-season tour and hopefully I can try and put my name in the hat for the first game of the season.

“It is about keeping everything simple and the one I was guilty of when things weren’t going my way, I was thinking ‘do I change it up’ and was over-thinking a lot of things when for me it’s working on that keeping it simple factor and that’s when I get my wicket-taking balls and how we build pressure as a team to then take the wickets around it.

“It’s just something I’ve got to work on and hopefully it will come with age and practice this winter and moving onto into next summer. Hopefully by the end of next summer I will be in a better position.”
—
Question: You also made your breakthrough in white ball cricket as well, making your debut in that nerve-jangling One-Day Cup match with Warwickshire at Edgbaston.

Dillon Pennington: “It seems a long time ago when I played in that white ball game but I still get reminded of my wonderful batting in that game! I think everyone thought I was going to get out every ball which I thought as well!

“A lot has been learnt since that game. I would have liked to have played a few more T20s but my fitness had to be looked after and I had to be rested and couldn’t get back into the side but the lads did superbly to win the competition.

“I was so glad I was part of finals day even though I wasn’t playing. It was unbelievable to be down in the dug out and listening to the crowd around me. That’s a day I will cherish for the rest of my life.”
—
Question: Did your performances in the ICC Under-19 World Cup in New Zealand give you a lot of confidence going into last season?

Dillon Pennington: “That tour and that whole winter gave me a lot of confidence to come back and to be able to try and hold my own in a professional environment in terms of my skill and start to learn that maybe I have got the skills to play at this standard which maybe I didn’t have before that trip.

“I’m so grateful I got that opportunity to go out there and that has helped me so much in pressure situations this summer and situations where you are a bit down and things aren’t going your way.

“You remember back to the good points and that helps you through.”
—
Question: You looked a bit angry with yourself when things weren’t quite clicking in the final game against Yorkshire?

Dillon Pennington: “I’ve got a tendancy to want everything to be perfect, every delivery, which I guess everyone does in their life, but I’ve got to remember we are humans and not everything goes right every single time.

“That’s another thing I’ve learnt this summer, that you’ve just got to be patient, and let things comes and remember that actually not everything is going to be right every delivery and you are going to make mistakes.”
—
Question: If everyone is fit, next year, Worcestershire will have Joe Leach, Wayne Parnell, Josh Tongue, Ed Barnard, Charlie Morris, George Scrimshaw, Pat Brown, Adam Finch and yourself available?

Dillon Pennington: “It will be brilliant. It will be really healthy competition. We all get on really well and we are looking forward to it already. I can’t wait.”
—
Question: Will you get a break before winter training resumes, your first on a full-time basis?

Dillon Pennington: “I’ve had a month off and am just re-starting in the gym and then hopefully will kick on and get ready for the fitness tests on November 12.

“I’m looking forward to this winter. I’ve never actually practiced for an entire winter in my whole cricket career.

Dillon Pennington: “Richo is very level-headed and very relaxed to be around but he is really good for me.

“He knows the way I want to learn, want to practice and everything he has done for me has been brilliant.

“But the fitness team of Ben and Ross have helped me loads. They have kept me on the park all summer. Those three have been tremendous.”