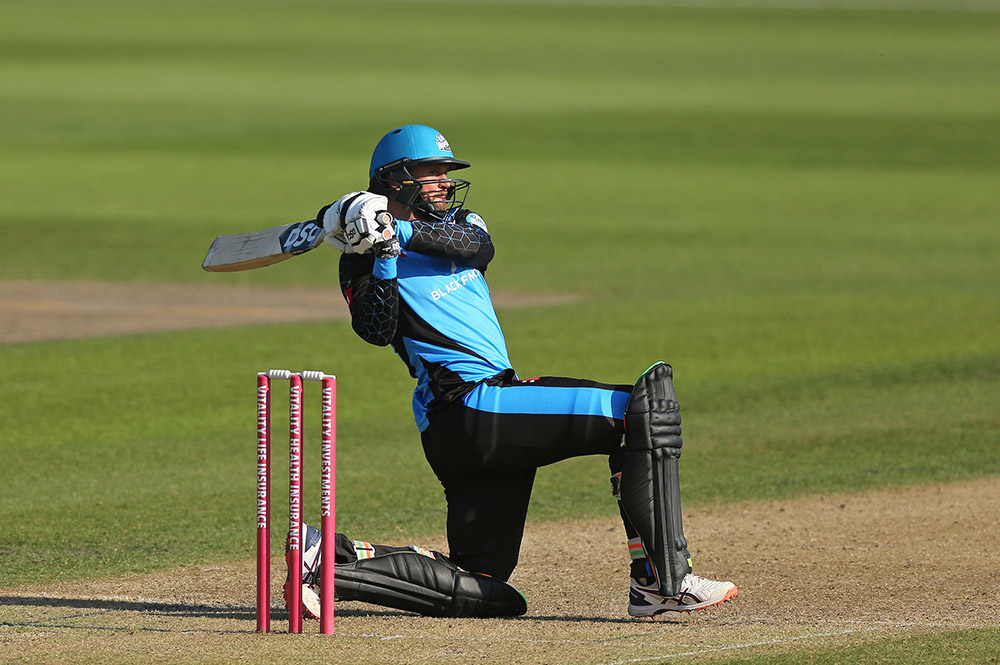 Ross Whiteley hit his 100th T20 six for Worcestershire Rapids as they went down by 25 runs to North Group leaders Lancashire Lightning at Blackfinch New Road.

Whiteley brought up the personal milestone with his third six during an explosive innings of 89 not out from 40 balls.

It came via a straight drive from Australian spinner Glenn Maxwell which ended up in the Basil D’Oliveira Stand.

Whiteley struck four sixes in total and 11 fours in his excellent knock which was only two short of his career best against Yorkshire at Headingley four years ago.

Crucially it also ensured no serious damage was done to the Rapids overall net run rate in the battle to reach the knockout stages of the competition.

Now they will be looking to bounce back in style when they entertain Notts Outlaws on Wednesday (4pm) in a game crucial to their hopes of obtaining the other top two spot and a home tie.

Tom Fell came into the Rapids side in place of Martin Guptill who has linked up with New Zealand in Sri Lanka while Hamish Rutherford made his home debut in the competition.

The Rapids opted to field first and struck an immediate blow with Alex Davies top-edging the first delivery of the game from Dillon Pennington to keeper Ben Cox.

Steven Croft and Liam Livingstone batted aggressively as the Lightning half century came up in 4.1 overs.
Croft raced to his half century off just 24 balls with four sixes and four fours.

Livingstone (32 off 26 balls) helped him add 83 in eight overs before he lofted Ed Barnard straight to Ross Whiteley at deep mid wicket.

Maxwell (12) flicked Pat Brown over the fine leg boundary for six but tried to repeat the shot from the next ball and was pouched by Pat Brown.

Captain Dane Vilas made a quickfire 23 before he cut hard at Barnard and picked out Rutherford at third man.

But Croft moved onto 94 before attempting a slog sweep in the final over from Moeen Ali and was stumped.

Croft faced 55 balls and struck six sixes and six fours and his fifth wicket partnership with James Faulkner (34 off 17 balls) was worth 60 in five overs.

When the Rapids launched their reply, Rutherford collected his first six over mid wicket off Richard Gleeson but on 15 lobbed a Saqib Mahmood delivery to mid on.

Riki Wessels (14) departed at deep mid wicket off the same bowler and Fell (3) was taken at long on – a fine low catch by Croft – off leg spinner Matt Parkinson.

Maxwell’s introduction to the attack paid dividends for Lancashire.

Moeen Ali (23) was bowled by his first delivery and then Wayne Parnell (1) perished at long on.

The Rapids lost half their side for 59 but then plundered 126 from the final 10 overs.

Whiteley reached a 20 ball half century which included 26 from an over by Richard Gleeson.

An entertaining stand of 86 in eight overs with Ben Cox (28) ended when the keeper provided Maxwell with a third scalp with Davies this time holding onto the chance at deep mid wicket.