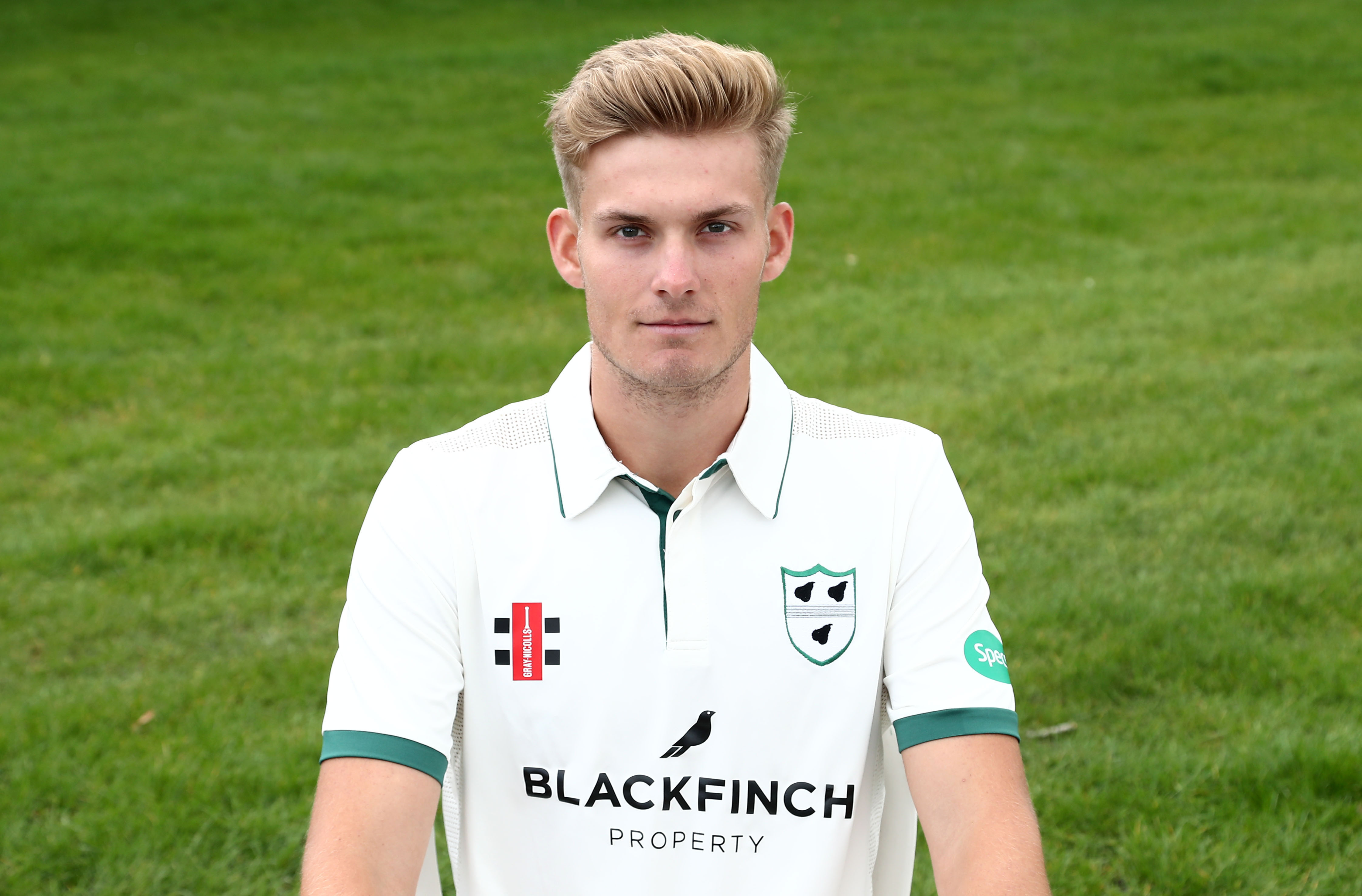 Adam Finch is looking to build this summer on his initial breakthrough into Worcestershire CCC’s senior side.

The England Under-19 paceman featured in eight first class matches during the 2019 campaign.

He relished the opportunity to test his skills against top class batsman including Marnus Labuschagne who went onto become one of the stars of last summer with Australia.

It was all part of a big learning curve for Finch in coming to terms with the demands of four-day cricket.

Here he looks back at last summer, the work he has undertaken during the winter and his hopes and ambitions for 2020.
—
Question: You played eight first class matches last summer, when you look back at things, you must have been delighted with that?

Adam Finch: “We had the conversation before I played and the goal was really just to play a first class game and try and get a bit of a taste of it so, to have played eight games, I’m really proud of that.

“I’m really hoping to kick on from that and hopefully play a few more.”
—
Question: The games you played were sort of split into two blocks, three or four early on and then another chunk towards the end of the season?

Adam Finch: “It is nice to get that first taste and first experience of it and then have a little bit of a period off where you can think ‘I really know what that feels like now, what the expectations are and how tough it is to do well at that level’ and kind of work at your game and yourself a little bit.

“To get another opportunity to play a few more games was good to try and put the hard work I’d done in that period where I wasn’t playing into the games so it was nice to have that little split.”
—
Question: You made your debut against Lancashire at Blackfinch New Road. What was it like for you to bowl at people like Liam Livingstone and Haseed Hameed who had played for England?

Adam Finch: “It was really good. I enjoyed the challenge. They are brilliant players so you’ve got to be right at the top of your game but it was nice to ‘mark’ yourself against them and see how well you could do and embrace the challenge of playing against really good batters. I really enjoyed it.”
—
Question: What is the biggest difference in the step up from Seconds cricket?

Adam Finch: “I suppose, whether it is or not, it feels like your margins are a little bit smaller. You are playing against a constant stream of very experienced first class cricketers, some England players.

“In Second Eleven cricket you get that every now and again but you have got a lot of lads who are fairly fresh to the game, fairly new to the game.

“There might be some Academy lads whereas, if you play first class cricket, you’ve got a hell of a lot of experience all the way through the team.

“It’s about thinking, how you are going to about getting wickets. It’s another step. It’s hard to describe. You feel it in the moment and feel you are playing at a different intensity.”
—

Question: Presumably when you bowl there is little margin for error?

Adam Finch: “Very minimum. That’s what makes doing well even better. If you get a wicket, you know you’ve worked very hard to get that wicket and it’s the same with scoring runs as well.”
—
Question: You were given the new ball for a couple of games. Is that where you feel you are best suited to bowl?

Adam Finch: “I’d like to think I could work to whatever I’m asked to do. You get a bit more of an opportunity to take wickets with the new ball because you might get a bit more movement.

“It was nice to get that opportunity from Joe (Leach) to have the new ball and that he felt confident enough for me to have it. I felt honoured. It is quite a big thing to be given the new ball.

“Hopefully it’s something that can continue in the future but equally try to be adaptable as I can in any role I’m asked to fill and do it as well as I can.”
—
Question: Early on in your first team career, you had to bowl to someone who became one of the stars of the summer in Marnus Labuschagne. What was that experience like?

Adam Finch: “It was a great experience. You could tell he was a brilliant player just from watching him, bowling at him and seeing how he went about his business.

“It was also equally brilliant for learning in how lads like Leachy and Mozza (Charlie Morris) spoke about how to bowl at him to try and get him out.

“Being in that environment, it was a brilliant learning experience. You bowl at guys like that who are world class and, they might get on top of you, but you come away with a brilliant experience and an opportunity to learn from that experience if you choose to.”
—
Question: What was your view of the game at Cheltenham which was pinpointed as one where game management as a bowling unit is crucial, ie: the first afternoon?

Adam Finch: “Myself and Dill (Pennington) were in the car together at the end of the game talking about all that.

“Even in the middle of the game we were talking about how we should go about different things, how we were looking to bowl, why things didn’t go well, why thing s went well.

“The best thing you can do about it is hold your hands up and say ‘I’m human, I’m going to have spells where I don’t do what I want, don’t execute my plan’ but I want to learn from those experiences.

“It’s the negative ones that you learn the most from. The expression ‘it’s not the end of the world’ was used a lot at the time. It might feel it at the time and you want the ground to swallow you up. It’s about learning and bouncing back stronger.”
—
Question: Although we lost narrowly, it was a superb advert for four-day cricket?

Adam Finch: “It was so close and brilliant to be part of. That is exactly why red ball cricket is superb, those situations you get built up over four days, with both teams and supporters on the edge of their seats.

“That is why traditionalists love red ball cricket and that’s why I love it as well.”
—
Question: Was it difficult to get used to bowling, for example, 20 plus overs in a day and to be as strong at 6.30pm as you are at 11am.

Adam Finch: “It’s tricky to get used. To. You don’t bowl that number of overs as an Academy lad or as a young cricketer. You are not allowed to.

“Being able to come back as good in your last over as your first over is a real tricky skill but we do a lot of fitness work with Ross Dewar (S and C coach) that puts us in good stead to be able to be just as strong at the start and close of play.

“The feeling of sore legs and a sore body when waking up in the morning was a new one.”
—
Question: How has the winter gone for you?

Adam Finch: “It’s been my first full winter training with Worcestershire. I’ve been with the Under-19s for a couple of years.

“I spent some time with Dewsy in the gym and, fitness wise, I feel in a good place and ready to crack on into the season and hopefully the hard work we’ve done this winter will last us for the summer.”
—
Question: Game management is an area you’ve discussed this winter?

Adam Finch: “The beauty of it is we have a fairly young squad and having that knowledge from Richo and Giddo and Kaddy has been brilliant.

“You can tap into that endless stream of knowledge they’ve got and us young lads, if we are honest, we would hold our hands up and say we probably don’t do a lot of it when you are younger.

“You think ‘we are going to win’ – or lose – and you don’t really get into the depths of what’s best for this 30 minutes of play. You are thinking of the broad perspective when actually games can be won and lost in an afternoon – like it was at Cheltenham.

“I never thought like that so, having these conversations, is such brilliant learning and bringing to the forefront something you might not have thought about for another couple of years.

“The more experienced lads are also keen to impart information, Parny (Wayne Parnell) with all his international experience

“Pat Brown is a close friend and you end up having in depth discussions on white ball cricket with him and it’s great.”
—
Question: It must act as an inspiration to the other lads seeing Pat Brown playing for England in the same way as with Moeen Ali?

Adam Finch: “You watch him on TV and he’s your friend and you think ‘how can I learn from him’”.
—
Question: What are your goals for this summer?

Adam Finch: “To try and play as many first class games as I can and really take the opportunities to learn from the lads that are around me and try and develop my game.

“The phrase ‘find your game’ is used a lot. To me, Daryl Mitchell will know his game. I’d love to be able to develop and say with complete confidence ‘this is my game’”