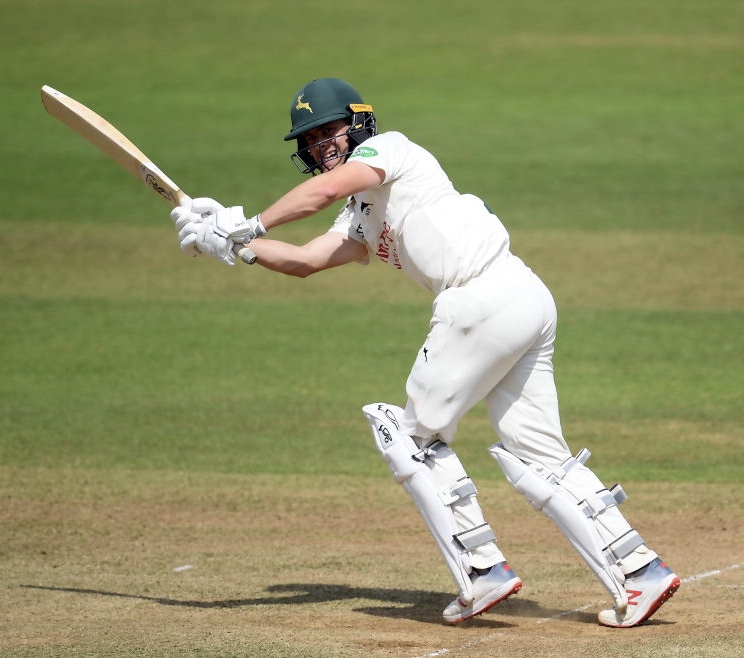 Jake Libby is settling into life at Blackfinch New Road after recently making the move from Nottinghamshire on a three-year contract.

The 26-year-old Cornishman made his mark at Minor Counties level and with Cardiff MCCU before being offered an opportunity in the first-class game at Trent Bridge five years ago.

Libby scored a double century on his Seconds debut and a hundred in his first senior appearance for Nottinghamshire.

Now he is looking to kick on even further with his career at Worcestershire and is convinced his best years are ahead of him.

He was Nottinghamshire’s leading run-scorer in the County Championship in 2018 – in Division One – and has broken into their successful white ball side during the past two years.

Here Libby looks back at his career and his aspirations for the future at Blackfinch New Road in a Question And Answer session with the Worcestershire CCC website.
—
JAKE LIBBY

Question: How did the opportunity come about to join Worcestershire?

Jake Libby: “I wanted a new challenge in my career and I just put it out there that I was able to leave Notts and Worcestershire was a county which was interested.

“I’ve always liked playing here and I think it is a great club so that’s what immediately drew me to the club.”
—
Question: Notts were happy for you to look for other clubs?

Jake Libby: “It was a lot off my own back really. With what happened at the club and stuff like that, it was time for me to get a fresh start somewhere and luckily the opportunity rose at Worcester.

“It’s a great city and I love the ground and it is a really exciting change for me.”
—
Question: You are 26, was it the right time in your career for such a move?

Jake Libby: “I’m not young anyone but I’m at the right age where I still want to develop and grow in the game.

“I thought it was the right time for me to move, hopefully my best years are still ahead of me and Worcestershire is a great opportunity to come and do that.”
—
Question: Alex Gidman is convinced your best years lie ahead?

Jake Libby: “Giddo has been great. He was the first person I chatted with here and he was really keen.
“Everything about the club, and what they stand for, is really good. Culture-wise it is really good.”
—
Question: Did you speak to Riki Wessels and Luke Wood about Worcestershire?

Jake Libby: “Definitely. I spoke to both of them and they love their time here. Riki is absolutely loving it down here and couldn’t speak highly enough of the club.

“Luke was the same. He was my best mate at Notts and he loved being down here (on loan).

“I heard so many good things about the place it was a no-brainer to come here.”
—
Question: Have you settled in?

Jake Libby: “They have made me feel really welcome. They seem a nice bunch of lads and the coaches have been so welcoming and made me really feel part of it.”
—
Question: You had five years at Notts and seemed to do well on debuts at all levels?

Jake Libby: “I hadn’t really thought about that but it’s always nice to start well. It makes you feel really part of the group and you get respect from the lads.

“It would be lovely to start here like that as well.”
—
Question: You came through the leagues and Minor Counties cricket in the South West?

Jake Libby: “I grew up in Cornwall and played a lot of my club cricket at Callington where my brother still plays and captains the team down there.

“That was a big part of my development, playing for the Cornwall age groups and Minor Counties and it was when I got to university in Cardiff that I kicked on.

“I opened up a few doors around the country because I think Cornwall sometimes does get tucked away.

Jake Libby: “I’ve always worked towards it. It’s always been a dream and a goal. When I was in Cornwall, I perhaps didn’t get the breaks I would have liked.

“I was always solid (as a player) and worked really hard without quite getting to where I wanted but it was, like I said, when I went to university that things started to develop.

“I did really well for the Minor Counties team and the MCCU team and that’s really where I got picked up from and really made inroads into the county game.

“Those Uni games are really valuable and to make some good scores in the early games gave me the confidence to think I could play at this level.

“I loved it there, I loved Cardiff and it really helped my game and helped develop me a lot.”
—
Question: On the back of that, Nottinghamshire offered you a two year contract?

Jake Libby: “The professional game was such a different kettle of fish, such a step up in level and standard but luckily I found my feet relatively quickly.

“I was around a good bunch of people at Notts and before that Sean Hooper from Cornwall helped me a lot, and still does now, and Mark O’Leary, the MCCU coach at Cardiff.

“They’ve been massive in my career and getting me to where I am now.

“I started well at Notts, had a little spell at Northants as well (on loan) and got some runs there.”
—
Question: You’ve also made the breakthrough more recently in the white ball cricket as well at Trent Bridge?

Jake Libby: “I think Notts, over the last few years, it’s been a tough (white ball) team to get into. I got my chance a couple of years ago in the T20 side which did really and I surpassed my own expectations.

“That has really helped my game. It’s good to play all formats and last season I had a good year as well, played the 50 over as well, and it’s a big step up in my game to be honest, bringing white ball into it, so it doesn’t put all the pressure on your red ball cricket.”
—
Question: In contrast last summer the influx of new players meant you didn’t play as much red ball cricket after playing all 14 games in 2018?

Jake Libby: “That was tough on me. I was leading run-scorer in 2018. To be dropped the next year was a tough one to take.

“Notts took a different road in terms of the signings they wanted to make. That’s professional sport, it’s what happened, so I had to bite that bullet.

“I was in and out of the side and maybe not batting in the role I would have liked so, all in all, a fresh start is good for me.”
—
Question: You like opening the batting?

Jake Libby: “I’d love to open. That’s what I see myself doing in the longer term. Whether that happens in the shorter term…but I think I’m an opener, a top three batsman, and that’s where I want to be.”
—
Question: There is competition with yourself, Daryl Mitchell and Hamish Rutherford?

Jake Libby: “I was fully aware of what I was coming into. Look, Mitch is a great player, one of the best players on the county circuit. In terms of openers, he is right up there.

“It is going to be good to learn off him and pick his brains and learn from Hamish as well, a fine cricketer.”
—
Question: Any banter with Ed Barnard about the ‘wonder’ catch to dismiss you in the Vitality Blast at Trent Bridge!

Jake Libby: “I haven’t mentioned it to him yet. To be honest, I stopped running. I thought it was six when I hit it, then four and then maybe two.

“He kept getting closer and caught it and to be fair he is a hell of a fielder and took an even better catch to dismiss Liam Livingstone (of Lancashire).”
—
Question: You would have watched how successful the Rapids have been in white ball cricket?

Jake Libby: “They are a very strong team. They’ve had a lot of success during the past couple of years.
“Hopefully I can add to that and compete as well.”
—
Question: Who were your cricketing heroes when you were growing up?

Jake Libby: “There were a few. I always liked Sachin Tendulkar and Ricky Ponting and also Ian Bell with the way he plays.”
—
Question: There haven’t been many Cornishman break into the first class game although you followed ‘Pasty’ Harris at Nottinghamshire?

Jake Libby: “ I think that’s what makes it so pleasing for myself. At the minute, there is only myself and Liam Norwell (Warwickshire) while Lewis Goldsworthy is making his way down at Somerset.

“It is really quite a proud thing It is quite tough for cricketers in Cornwall to get a break. You are tucked away down there.

“It is difficult to come through. That’s why it has been a challenge growing up and I’m really thankful to people like Sean Hooper in helping me to progress out of Cornwall and his link with Notts initially got me there.

“I’m really proud to be Cornish. I get a lot of support, which is really nice, and any guys who do well from Cornwall always get that support.”