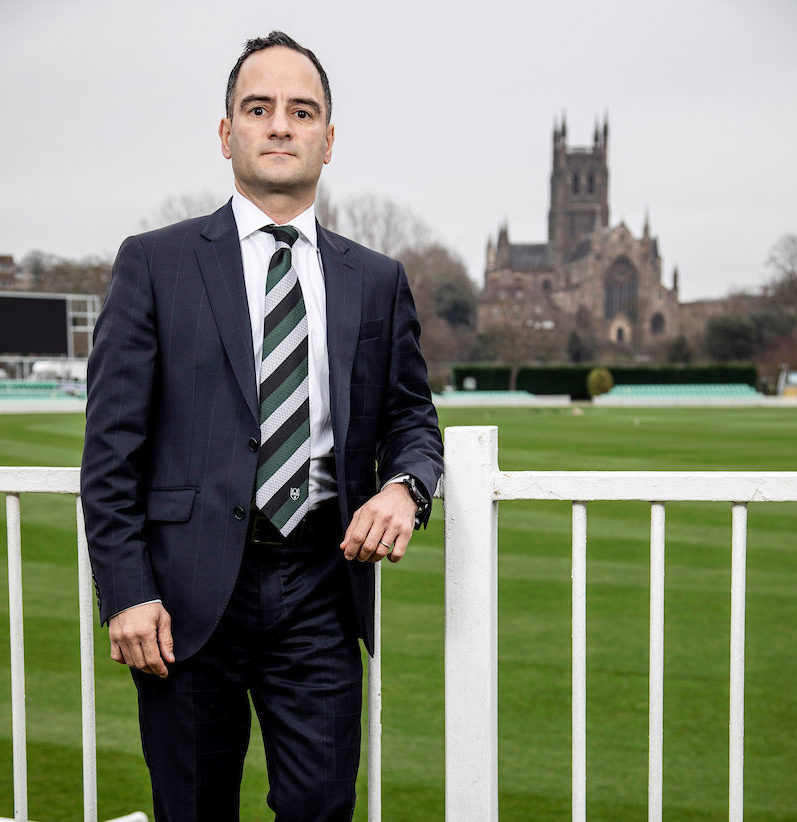 Worcestershire CCC Chairman, Mr Fanos Hira, has reflected on a season of contrasting fortunes for the County in 2019.

He was full of praise for the Rapids form in white ball cricket, including reaching the final again in the Vitality Blast.

Mr Hira stressed the determination of the Rapids not to rest on their laurels and the goal is to become the best white ball team in the country.

He re-emphasised that becoming a sustainable Division One side in the Specsavers County Championship is also a target for the County after a disappointing season.

There was a sense of pride at Pat Brown joining Moeen Ali in earning an international call-up for the T20Is in New Zealand.

Mr Hira said Worcestershire were looking at world class players and that the club is not constrained.

Here he looks back at 2019 and to what might lie ahead in 2020 in a Question and Answer Session with the Worcestershire CCC website.
—
Question: Mr Chairman, the 2019 season is now over, on the cricketing side, what are your impressions?

Fanos Hira: “I think in general it has been a really fulsome year. There have been lots of challenges on and off the pitch and there has been some inconceivable highs.

“I think of the convincing win at Blackfinch New Road over Durham in the T20 and it was great to silence the crowd at Sussex in the T20 quarter-final.

“Also beating Notts (Outlaws) at Trent Bridge and on finals day at Edgbaston was superb. Some great highs.

“But sometimes when you get some astonishing highs, you also get some pretty agonising lows as well and we’ve had some of those as well.”
—
Question: To be challenging for honours in two out of three competitions, most counties would settle for that?

Fanos Hira: “One of the things we said last year was that we had expectations to win things and this year we came very close to doing so again.

“I think it’s worth just pointing out that our expectations have been completely reset here at the club and in the space of 14-15 months we’ve done remarkably well in some competitions.

“We won the T20 Blast and came agonisingly close to retaining it.

“Also when you look at the 50 over competitions, contrary to much media commentary, ECB expectation communicated to Chairman last week is that the competition is NOT expected to decline. It will still be a competition that continues to have merit and possibly can grow.

“Let’s look at how we’ve done in 50 over cricket too. We’ve got to the quarter-finals this year, eventually losing to the winners, and last year we got to the semi-finals as well. So on balance in white ball cricket, it’s been an incredible feat and we should be really proud and I applaud everyone.”
—
Question: We could argue with much justification that we are the best white ball team in the country in recent years?

Fanos Hira: “I’m not necessarily saying that. Our aim in white ball quite simply is to be the best white ball team out there and we are close judging by records.

“But I don’t want anyone to think that we are ever in anyway complacent.

“The players are having a rest now after a long season but we have expectations and when we regroup, we go again and aim very very high.

“Our challenge and our aim is to consistently get to finals and to hopefully win them. It is about re-assessing expectations and I think we have done that really well over the last 14-15 months and I think that should be applauded.

“The club has done exceptionally well in white ball cricket.”
—

Question: Over the last two years, the club have set new standards in white ball cricket?

Fanos Hira: “It’s worth pointing out that in 2017 we hardly won a game of T20. Therefore we’ve come a long way under Alex Gidman and Alan Richardson in T20. What was particularly pleasing this year was that many people contributed to that success so it was very much a team effort.

“As I mentioned, one of my real highlights was being at Hove and watching us claw that game back in the T20 quarter-final with our bowling and then we silenced the crowd with quite brilliant batting.

“You saw exceptional performances, not just from Moeen which truly was a remarkable innings, but also what we consistently saw over the last three to four games was Riki (Wessels) playing in such an unselfish way, giving the strike to Mo or Martin Guptil beforehand and then, when they are dismissed, he launches his shots.

“I’ve been so impressed with him and that’s not just my view but, more importantly, the players view and that’s why he won the Players’ Player Award and that indicates he has come in and settled and he has led by example and we’ve been really impressed by him.”
—
Question: Tremendous for the club to see Pat Brown called up by England?

Fanos Hira: “Absolutely. A huge achievement and we are delighted for Pat. It’s great for the club to have two England players in white ball cricket.

“But it’s not just those on the front line who have contributed. It’s about recognising as well the hidden heroes, the support staff, and I would expect some of them to get international recognition as well.

“It’s great Moeen has got his white ball contract and Pat Brown is a debutant in the international set-up. It’s fantastic but I wouldn’t rule out other people possibly getting call-ups in due course if they continue to perform. We have young talent that if they stay fit they are likely to be in contention – we hope so.”
—
Question: In contrast the season in Specsavers County Championship cricket did not go as anticipated?

Fanos Hira: “No it didn’t and I should stress the Board had goals at the start of the season. In white ball cricket, it was to reach one quarter-final and we exceeded that goal considerably.

“In contrast to that, and part of what I called the agonising lows, was the red ball performance. We had a target to get promoted – and we didn’t achieve that.

“Everyone takes that to heart because we want to do well. Our goal is to be something that frankly we haven’t been for the last decade, a sustainable red ball side, rather than bobbing in between divisions.

“For us to become a sustainable Division One side, we’ve clearly got a lot more work to do.

“The Cricket Steering Group, led by Paul Pridgeon and including the coaching staff, have reflected and they are very self-critical. They have asked very piercing questions of themselves and lessons have been learnt and we would expect things to go better next year. However you don’t get better doing the same things so we would expect some changes next year.

“There are no excuses but that path to achieving any goal, sadly, is rarely linear. It clearly was a setback not getting promoted but perhaps we are not as far off as we currently think we are.

“The reason I think this is because we listen to people and we’ve heard some glowing praise for our bowling attack. Cricket Australia, in the match at Blackfinch New Road, rated them really highly.

“What is important is to take stock on the emerging talent here and one of the ways to do this is looking at the caps we’ve awarded in the last three years.

“This year we’ve given new caps to Jack Haynes, Josh Dell and Adam Finch, all from our Academy, last year to Dillon Pennington, Ben Twohig, Alex Milton and Ollie Westbury and the year before to Josh Tongue and Pat Brown.

“Around half of our squad have been capped in the past three years and some of them are already getting International recognition.

“Josh has played for England Lions and hopefully he can get to those levels again when he recovers from injury and and we’ve already discussed Pat Brown’s call-up.

“Maybe we’ve been a bit naïve, if I’m being over critical, in assuming fresh caps can develop quickly when sometime it takes time.

“We are always going to rely on our Academy but the Cricket Steering Group recognises we might need to go out and identify someone as we did with Riki last year.

“The Steering Group are tasked with and are busy now at looking at world class talent now and let’s see where that takes us in the few weeks or months.

“Financially we are not in any way constrained. If world class talent comes in front of us, and it’s right for the team and the individuals, they will come.

“On the question of ‘does anyone want to come here?’ without puffing out our chest too much, we will say ‘we’ve had remarkable success in white ball cricket, come and join us and develop in red ball too.

“It is hopefully a little bit more appealing and attractive for those we are looking at.

“It doesn’t have to be seismic change. It can be one or two people finding form again. Sometimes we’ve over-relied on certain individuals.

“Now some of the younger talent is becoming established. There are a lot of people with a lot of proving to do and we accept that.”