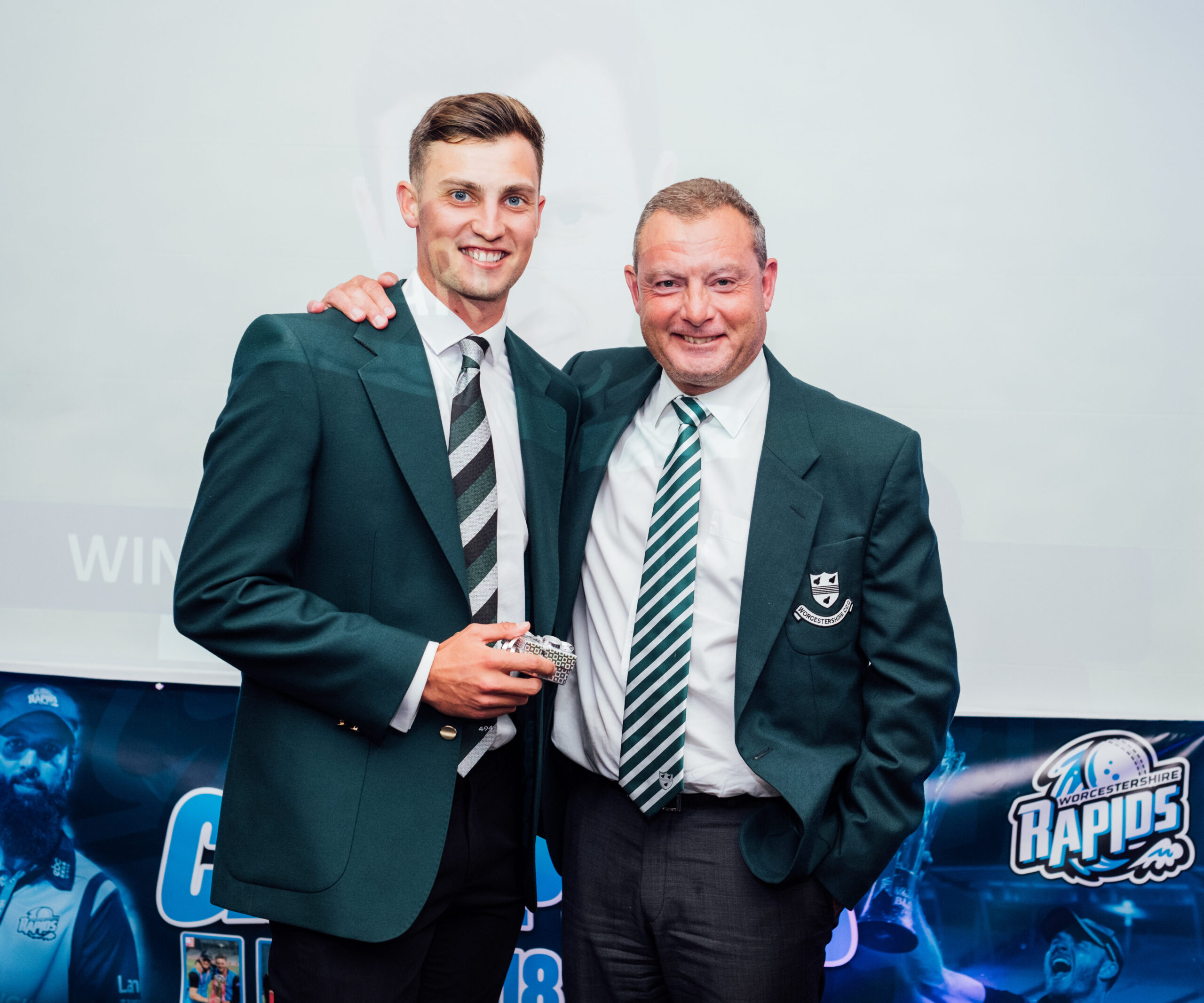 Here is the full list of Worcestershire CCC 2018 award winners:

Pat Brown won the award for his performance in the Vitality Blast T20 semi-final against Lancashire with his four wickets for 21 runs including 14 dot balls.

It included a trio of wickets in Brown’s final over to put the seal on the Rapids victory.

He was a consistent performer throughout the tournament and picked up two or more wickets in 13 of the Blast matches.

Members of the Fans Forum vote on each match for the best fielder.

Points are also awarded for catches, run outs and stumpings.

Run outs can have a major impact on a match, and there were 19 across all formats this year.

Nine of those run outs (including two in the t20 semi-final win) were by one player. Add to that his 25 catches (including a stunning catch to dismiss Surrey’s Dean Elgar), and his all-round excellent fielding, this year’s winner of this year’s award is Ed Barnard.

BBC Hereford and Worcester have covered every day of Worcestershire’s season in the Specsavers County Championship, Vitality Blast T20, and Royal London One-Day Cup, with ball by ball commentary on every game, home and away.

Every now and then something happens that is not only unusual but at times unique.

Such an event occurred at Scarborough, where Worcestershire beat Yorkshire by an innings in the Championship in mid-wicket.

Dillon Pennington was bowling down the slope at express pace, and clean-bowled Yorkshire batsman Jack Brooks.

The usual celebrations took place and then someone realised the ball was missing. Having hit the top of the stump it had careered off to the boundary.

Tom Fell came down for a wander round, as the crowd were pointing at the sight screen. The crowd were getting more animated telling him where the ball was.

In the end it was found, stuck half-way up the sight screen, and I for one (Dave Bradley) had never seen that before.

So the BBC Hereford and Worcester almost lost for words award goes to Tom Fell.

This player collected over 50 per cent of the vote to win the Supporters’ Association Player of The Year Award.

He was a consistent performer with bat and ball in the Specsavers County Championship with a season’s best 49 wickets and over 500 runs.

For the second year running, the award goes to Ed Barnard.

This player has been a breath of fresh air this year and has been a firm favourite amongst the senior team. Issy joined the team on loan from our local rivals down the road and has had a phenomenal year.

At the age of 16 she has headed up our bowling attack with great maturity and blown away top order batting attacks with her frightening pace.

Her “different” style has certainly been a hit with her team mates, she is not afraid of standing out from the crowd whether it’s dying her hair, or wearing odd shoes, she has certainly found her place within the team.

We hope that she wants to retain her place with the squad next year and help us with our push to division one.

Winner: Issy Wong (Not in attendance, Captain Lauren Rowles collected on her behalf)
—

She has played a pivotal role this season with both bat and keeping for the Women’s team. She has been professional, committed and hungry for success and has been a role model for the rest of the team.

Her dedication to training over the winter and summer months has really developed her game and paid off with her performances this year.

None other than the play off final against Cornwall where her top score of 78 contributed greatly to a convincing win over Cornwall to gain us promotion back into Division Two of the ECB Championship.

Chloe has been “rock solid” behind the stumps, taking key catches and her quick hands have gained the team vital wickets. Chloe has had a breakthrough season for herself personally but also for Worcestershire Women.

The Damian D’Oliveira Academy Player of the Year Award

This player has had an outstanding 2018 culminating in England U19 selection for the summer series and this winter. Jack is the son of former WCCC cricketer Gavin Haynes and attends Malvern College.

He continues to impress the staff here at Blackfinch New Road and has made consistent performances for the Second Eleven in 2017 and 2018.

An exciting future beckons and he will join the playing staff full time in 2019 after completing his studies in June.

Pat Brown: Pat joined the academy as a 16 year old from Huntingdonshire and in September 2016 took up the University of Worcester scholarship. In his first year as a full time student Pat made his senior debut for the County in all formats.

In 2018 very little needs to be said about the impression Pat has made. A very exciting 2018-19 lies ahead for Pat.
—
Alex Milton: Alex left the academy in 2014 and has been on a fantastic journey that has taken in the MCC Young Cricketers and a full time degree in Cardiff.

Alex has fought hard for his professional opportunity and in 2018 has made his senior debut scoring his maiden first class 100 in the Championship match with Somerset at Blackfinch New Road.

Dillon Pennington: Dillon came to prominence in 2016 joining our academy half way through the summer.

Following some impressive performances in 2017 including playing his first ever three day game in 2018 he represented England U19s at the ICC World Cup in New Zealand.

This summer Dillon has made his senior debut receiving impressive plaudits from many quarters including Kane Williamson after the Yorkshire game at Scarborough.

Josh Dell: Josh left the academy at the end of the 2016 season and spent last year and 2018 playing Second Eleven cricket.

Josh represented England Under-19s in 2016 versus Sri Lanka and has been rewarded for his performance this summer with his first professional contract.
—

Players’ Player of the Year Award – Sponsored by Blackfinch

This player has produced the goods for Worcestershire in the Specsavers County Championship ever since breaking into the side three and a half years ago.

Last summer he played a key role in the County winning promotion to Division One with 47 wickets and nearly 600 runs.

This summer at the higher level he has taken 49 wickets and scored over 500 runs.

He has also produced some key performances in the Royal London One-Day Cup and Vitality Blast and instigated some brilliant run outs with his razor sharp fielding.

Presented By: daughter of the late Don Kenyon, Sue Jackson.

Moeen Ali has won this award for his superb all-round performance in the Specsavers County Championship match against Yorkshire at Scarborough.

The all-rounder scored 219 and also picked up eight wickets in the game to help Worcestershire complete an innings victory in mid-August.

It was a performance that helped Moeen to regain his place in the England side for the remaining two Tests with India of the summer.

T20 Player of the Year Award – Sponsored by EBC Group

This player capped a superb season in the Vitality Blast campaign for the Worcestershire Rapids by finishing as the competition’s leading wicket-taker.

He ended with 31 wickets including four in the semi-final win over Lancashire Lightning and then conceded just 14 runs in four overs in the final triumph over Sussex Sharks.

He bamboozled many batsmen with his array of different types of deliveries.

The winner of the T20 Player of the Year Award goes to Pat Brown.

This player has enjoyed another productive season with bat and ball which earned him his first England Lions call-up.

He also was a vital part of the County’s white ball cricket success.

However off the field Barnard also typified the dressing room spirit and harmony evident throughout the squad.