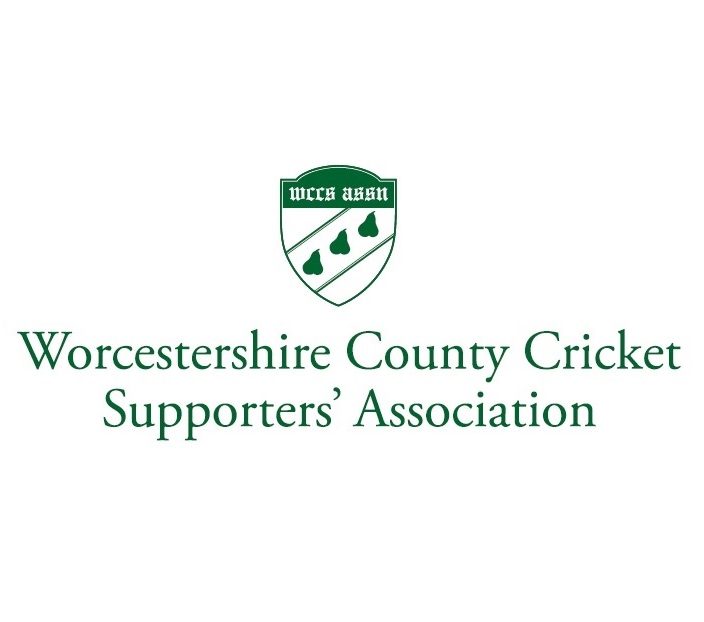 Jenkins said: “It’s been a great season on the field for the club with promotion back to Division One of the County Championship and, off the field, big strides being made towards the club becoming even more of a successful 365 days a year business.

“But from the Association’s point of view, we would like to say thank you to everyone who has supported us with all the various activities and events we participate in which ultimately we hope will benefit the cricket club.

“Giving your support to things like the Fifty-Fifty competition, the Super Raffle, the summer lunch, purchasing items from the Association shop, is greatly appreciated – by us and the cricket club we all love and cherish.”

The ashes of the Supporters’ Association’s late chairman Ken Mills MBE have been laid to rest at Blackfinch New Road.

A short and poignant service conducted by the Reverend Michael Vockins saw the ashes placed with those of Ken’s wife Pat in the Garden Of Remembrance.

The Supporters’ Association are to close the Memorial Fund launched in honour of Ken at the end of the year.

Ken spent 41 years as Association chairman and helped to raise hundreds of thousands of pounds which were donated to the cricket club on a host of projects.

All monies raised will be used for a future project for the benefit of all members.

There is still time to make a donation and cheques should be made payable to ‘WCCSA’ and sent to Cynthia Crawford MBE, President, Worcestershire Supporters’ Association, County Ground, New Road, Worcester, WR2 4QQ.

Stephen Groves of Mansfield was the winner of the Worcestershire Supporters’ Association 20217 Super Draw and its three-pronged prize.

The draw was the brainchild of Worcestershire CCC committee Dave Kennedy and an additional fund raiser which ran alongside the popular Fifty-Fifty competition.

It boosted the Association’s funds by a further £750.00p

Kennedy said: “I would like to thank everyone who has taken part in the competition. Their support was much appreciated.

TIME RUNNING OUT TO PURCHASE 2018 CALENDARS

Christmas is fast approaching and an ideal present would be the Worcestershire Supporters’ Association 2018 calendar.

The calendars have sold out for the past two years and the message BUY NOW if you want to purchase the latest edition and avoid disappointment.

Cheques for the calendars should be made payable to ‘WCCSA’.

An innovation for 2018 edition is a list of each month’s birthdays (and deaths) for the 500 Pears cricketers in the County Championship since 1899 until the end of the 2016 season.

All that is, except the ‘Magnificent Seven’ – the players whose birthdays could not be found by Andrew Thomas when researching his book ‘Pears 150.’

Selecting your best monthly team of Worcestershire CCC stars listed in the calendar will not be easy.

For example, who would be the Pears wicket-keeper for June – SJ Rhodes or SM Davies?

There are 94 days in the year without any Pears birthdays. The most popular date is 24th November with seven cricketers, one of whom is Sir Ian Botham.

Purchase a copy of the Supporters’ Association calendar and you can mull over the above conundrums at your leisure during the winter months until the 2018 season is upon us.

Due to increased costs, the Supporters’ Association’s are restructuring their plans for a new shop at Blackfinch New Road.

Originally it was hoped to erect a new building on the Premier Inn side of the ground situated near to the site of the second scoreboard.

Those plans have been shelved but the good news is the Supporters’ Association are hoping to relocate to a different point on the ground and are in close contact with the County’s Chief Executive Tom Scott over this potential project.

We will endeavour to release more details if and when any proposals become more concrete.

Details have been finalised for the Supporters’ Association annual Christmas Lunch which is being held on Sunday, December 10 in the Graeme Hick Pavilion (12.30pm-1pm start).

The menu is now available to view and consists of an excellent choice of courses in keeping with Worcestershire CCC’s excellent reputation for providing top quality cuisine.

The various courses are:

b) Chicken Liver Pate with Red Onion Marmalade and Ciabatta

b) Chocolate Orange Torte and Cream

The cost is £28 for all members and guests and cheques should be made payable to ‘WCCSA’ and sent to chairman Andrew Jenkins, County Ground, Blackfinch New Road, Worcester, WR2 4QQ.

All-rounder Ed Barnard was voted the Worcestershire Supporters’ Association Player Of The Year for 2017.

The 21-year-old received his award when the County held their Awards Evening in the McMinn Developments Marquee at Blackfinch New Road at the end of the season.

Barnard polled 50 per cent of all the votes to make the former England Under-19 player the overwhelming winner.

He picked up 47 Specsavers County Championship wickets and scored nearly 600 runs, often chipping in with vital contributions as part of an effective lower order.

FIFTY-FIFTY COMPETITION WILL RETURN FOR 2018

Worcestershire Supporters’ Association have finalised the details and dates for their popular Fifty-Fifty competition which will again be staged during the 2018 season.

More than 650 members participated in the four draws last summer in which the prizes range from £50 to £500 for each draw.

Association committee member Dave Kennedy will again be running the competition after taking over from late chairman Ken Mills MBE.

It again costs £20 to enter and profits from this competition will, as always, go towards the Ground Improvement Fund.

Anyone wanting to enter the competition should make cheques payable to the Worcestershire County Cricket Supporters’ Association (WCCSA).

Worcestershire County Cricket Club have had many players wear their colours who have represented England and many other countries in international cricket.

Over many years those players who combined playing for Worcestershire with either Test, ODI or T20I cricket have had their names included on the Honours Boards situated at the back of the Basil D’Oliveira Stand.

Now thanks to the Worcestershire Supporters’ Association these Honours Boards have been updated and given a make-over so they stand out even more when supporters walking around the ground view them.

Supporters’ Association chairman Andrew Jenkins said: “There have many great players from many countries over many years who have played for Worcestershire and we are all proud of Moeen Ali in the current England team.

“We have updated the Honours Boards and it makes you feel proud when you see some of the names on there and to think they represented this County we all love at some stage of their careers.”

The Association would like to thank Andrew Thomas – author of ‘Pears 150’ – for his efforts in updating the boards.
‘Pears’ 150′ is still available to buy at the Supporters’ Association Shop during the season and can be ordered – priced £28 plus p and p – during the winter months by contacting Andrew Thomas c-o Worcestershire CCC, New Road, Worcester.

Andrew Jenkins has been re-elected as chairman of the Worcestershire Supporters’ Association.

Jenkins took over the post after the sad death of Ken Mills 12 months ago.

He was re-elected for a further year at the Annual General Meeting of the Association which was held in the McMinn Development Marquee.

Cynthia Crawford was re-elected as Association president and there is a new treasurer in the Reverend John Wright.

He has taken over from Andrew Jenkins who had replaced Ken Mills in an interim role.

On the same day, the Association had held their annual summer lunch with more than 160 members and guests attending.

The customary raffle raised £595 and the Association would like to thank the generosity of members – and also the Worcestershire CCC catering department for producing another excellent lunch which was appreciated by all in attendance.

Andrew Jenkins, in his annual report, said: “I would like to thank the committee for their support and help following the death of Ken Mills.

“In particular I would like to mention Dave Kennedy who once again has worked tirelessly and, without his help and support, my job would have been much harder.”

Worcestershire Supporters’ Association booked a table at the County’s annual Memorabilia Day which was held on August Bank Holiday Monday – the opening day of the game with Gloucestershire – in the McMinn Developments Marquee.

Chairman Andrew Jenkins and Ken Workman manned the table in selling the varied and extensive sporting Memorabilia left to the Association by their late chairman Ken Mills MBE.

Their efforts proved extremely worthwhile with £750 being raised for Association funds.

If you want to renew or take out a Supporters’ Association membership for 2018, the cost remains at £5 per annum or £25 for a life membership (aged over 60).

Cheques should be made payable to ‘WCCSA’ and sent to Andrew Jenkins, County Ground, Blackfinch New Road, Worcester, WR2 4QQ