A To Z Of Worcestershire Cricket Pay Respects At Funeral Of Naomi D’oliveira
Friday, January 26th, 2018 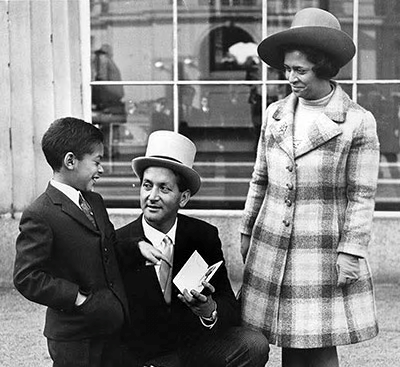 What read like an A to Z of Worcestershire CCC turned out in force to pay their last respects at a service of Celebration and Thanksgiving for the life of Naomi D’Oliveira at Worcester Crematorium today.

It was a case of standing room only at the service for Naomi who was married to County legend Basil D’Oliveira for more than 50 years.

Naomi sadly passed away in St. Richard’s Hospice after a short illness.

She was the mother of Damian and Shaun D’Oliveira and grandmother of Brett, Ryan, Dominic and Marcus D’Oliveira.

Those present heard a moving reading from Celebrant Father Hugh Sinclair who had also presided over the services for Basil and Damian D’Oliveira.

Father Sinclair said: “The world is certainly poorer for her passing but we are enriched by our memories of this great lady.

“Her living was a powerful exposition of life as it should be lived. Hers was a life lived both in the limelight and in private.

“Married for 50 years to Basil, who was a larger than life character, her life’s work was to be the rock on which the family was built.

“She stood out as a most wonderful example of wife and mother, ever supportive and loyal to Basil. She was a dedicated and loving mother to Damian and Shaun.

“Naomi was blessed with a joyful heart, a glorious smile and a lively sense of humour.

“She was a fine performer in her own right at cricket and hockey and could at the latter have played internationally had things been different.

“Naomi was so proud of all that Damian and Shaun had achieved and took much joy in following the progress of her grandchildren. I will always remember her as a gracious friend.”

After a moving service, including the hymns ‘All Things Bright And Beautiful’ and ‘Jerusalem’, a gathering was attended by many who were proud to have known Naomi in the Graeme Hick Pavilion.